45 singles and 5 LPs for sale on ebay 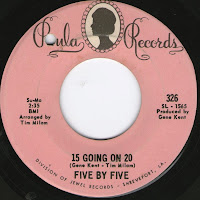 I have just listed a whole bunch of singles plus 5 LPs (the complete set of Bonehead Crunchers)
Most have sound clips, so enjoy...

You can find the records here:


BOSTON BOPPERS -Did You Get What You Wanted-Mutoid GLAM 1974 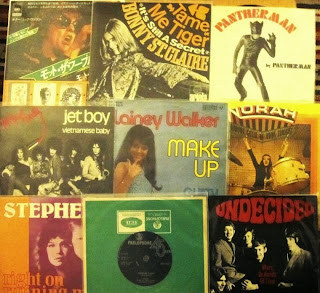 Another long day...a smaller but perfectly formed bunch, no great bargains, but some top shelf stuff including a Dutch Jet Boy, German Masters Apprentices, The Norah single I was missing as well the striking German pic sleeve of Tame Me Tiger. I think this is the stereo mix which packs a lesser wallop, but the photo more than makes up for it. The Japanese Mott single couples Saturday Gigs with Foxy Foxy. The most surprising find was the South African Suck single.

All in all another great Utrecht. It has become much harder to find cheap copies of Glam stuff, the dealers have usually wised up, but that just makes it more challenging...

A good first day at the fair. 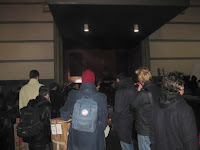 So 7am until 5pm...pretty much non-stop walking up and down, back and forth...In fact Utrecht may be considered a personal marathon. As you can see I took16,344 steps today... 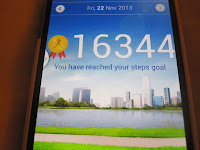 Ladies and gentlemen...may I present you with the next best thing to congealed donkey semen...FRIKANDELLEN!

OK, OK, onto the records. In fact about half of these are spares which I will be listing next week... 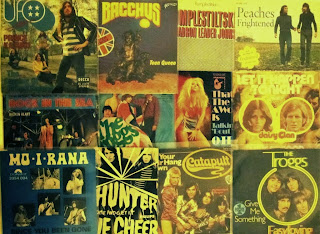 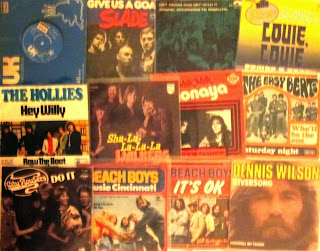 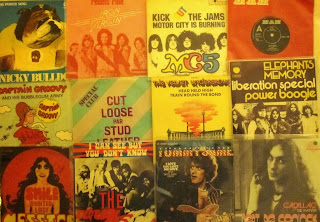 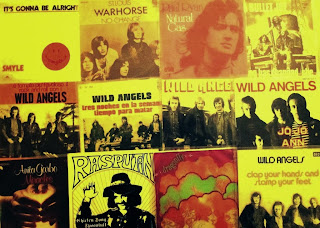 Of the Michel "da capo" Terstegen, the only one I got was the good Dragonfly single. Celestial Empire. An inspired fuzzfest...

Bring on tomorrow!
Posted by Robin Wills at 5:31 pm 1 comment: 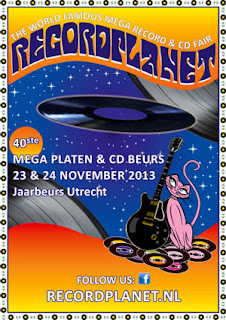 Here we go again...tomorrow at 7am I'll be on the floor ready to dig. Of added interest this year is the fact that the Michel Terstegen collection has been purchased as a whole by a Swedish collective. http://collection-michel-dacapo.123website.nl/ The Nederbeat section will be available at the fair along with a selection of other titles, although the prices are bound to be pretty "Swedish"

I will report back tomorrow... 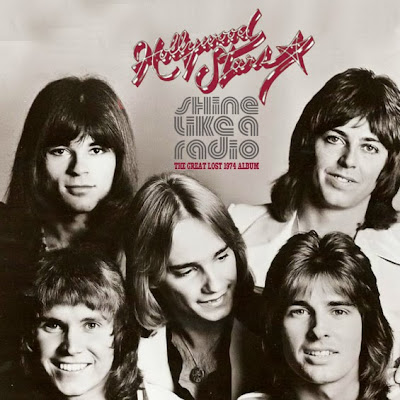 With the release of the LP only days away, here is the background on how Shine Like a Radio finally gained release as well as a track by track descriptor…


For me, It all started back in 1975. Bomp magazine not only featured The Flamin’ Groovies on the cover of the spring 1975 issue, but also a long piece written by Kim Fowley on the next big thing that never was –The Hollywood Stars. It was a tragic but fascinating story, they seemed just like the band we were crying out for at the time. This band had it all - the looks, attitude, great song titles plus the involvement of the king of Sleaze. When would I ever get to hear song like Russia, Kings of The Night Time World or Shine Like a Radio? The song titles alone promised so much, but as highlighted in the article the band was no more, but the story behind the unreleased album got me dreaming.


Last year the dream started to meld into reality. Terry Rae (drummer) left a comment on the Flamin’ Groovies post about the Dutch issue Shake Some Action (which he played on). I guess my second question to him was…do you have the 1974 recordings? The answer was positive and he sent me a CDR of the 1974 recordings along with the 1976 Neil Merryweather demos (10 cracking from the Hollywood Stars MKII), for the first time I was finally able to hear the tracks. The tape was very hissy and some intros and endings were clipped, but I was in awe. Later Ruben De Fuentes sent me a remastered version and although it was great to hear clearer versions, something was missing, the sound was too brash and trebly. Still the thought of getting the LP released was now becoming a concrete project. Later on a ¼” tape was discovered in the hands of singer of Scott Phares, and although missing a bit of top, this was the real deal and made the hairs on the back of my neck quiver.


You must remember that the album was never really finished and Scott’s tape was a collection of rough mixes they presented to the label. But I am glad these are rough mixes as the rough edges provide an urgency which may have been subdued by a proper mix.

The LP was mastered and cut at Fluid Mastering in London http://www.fluidmastering.com and it really sound perfect, loud, clear yet meaty and warm. After all these years, I am very proud to have been instrumental in finally getting these great songs and performances released.


1.    Supermen are Always Gentlemen
Loud and brash rocker with cutting guitars to the fore. It’s a great first track as it combines a rough and ready urgency with a great chorus hook with blistering lead breaks and a fine tough vocal by Scott.


Later re-written and popularised by Kiss. The original is a great Stonesian rocker. Particularly impressive is Marc Anthony’s tight Richards-like riffing which chugs along under Ruben’s great lead. This one rocks supreme.


Angie Bowie said it sounded like a number one hit and in a better world this would have come to pass. Kim Fowley’s own version on Automatic didn’t bring out the best in the song, however The Stars turn it into a real tour de Force. The backing vocals are a real hoot to boot!


Another classic Mars Bonfire song. The production is lush and more refined. It provides the perfect backdrop to this tale of Teenage Spies and betrayal ” Bureaucrats and winter palace, army tanks and ballerinas…” A  striking stand out track


Mark Anthony’s plea to the record business to give the Kids a Chance. It fell on deaf ears, but this short and snappy statement of intent makes a great closer to side one.


Some songs are built around a killer riff, such as The Move’s Do Ya, the Velvet’s Sweet Jane or Ducks Deluxe’s Fireball. This is one of the better examples  of a riff song and a classic piece of brash 70s Rock.  Alice Cooper recognised its value as he later covered the song on the Welcome To My Nightmare LP. This original version is far superior


Roses and Rainbows was a small hit for Danny Hutton and was an inspired choice for  a cover. From the way the song emerges from Escape to the delightful backing vocals supporting Scott’s pure and crystalline vocals, this is another performance which could have provided The Stars with  bona fide hit.


A fine original capturing a perfect blend of outright rock with a certain Buffalo Springfield appeal. Great vocals and guitar throughout.


What this album is all about, energy, electricity and a great tune. The lyrics allude that being a guitarist in a Rock and Roll band doesn’t always guarantee being able to  hold on to a special lady. You don’t often get references to a Ringo solo effort, but you do here…


Although a bit corny at times (Glenn Miller?), the song is a heart-felt ode to loss of innocence. Nostalgia a vehicle to loss as valid then as it is now. There’s a nice off hand feel to the overall performance and the backing vocals are stellar.


Like Mott The Hoople giving a nod to A Day in The Life. The song is supremely dramatic with Scott’s vocal full of pathos. There’s nice line in Mellotron layering and with Ruben lead sounding just like Mick Ronson; it’s a truly majestic tour de force and a perfect album closer

Shine Like a Radio should be reaching stores at the end of this month. 1000 copies (Vinyl only!) are being split for distribution between Europe and the US.


US: http://lightintheattic.net/releases/978-shine-like-a-radio-the-great-lost-1974-album
Posted by Robin Wills at 2:39 pm 8 comments: 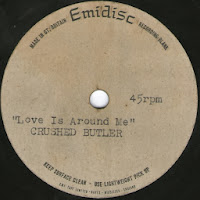 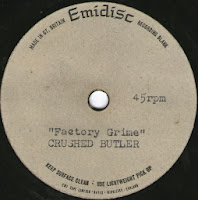 Probably culled from Crushed Butler’s second demo session, these two tracks find Jesse Hector, Darryl Read (RIP) and Alan Butler at their raucous best and delivering one of the most essential examples of UK proto Punk. Love is Around Me is more melodic and might have been written by Glo Macari (Lou’s daughter) who strangely enough used those other Proto Punkers Slow Load on her Looking For Love single (1971). Factory Grime is a pure rough and ready bestial performance, like a wilder Third World War with Jesse at his most venomous. It’s all wonderful and inspirational stuff. I assume that these are the same takes and mixes as on the Uncrushed 10”, perhaps someone could confirm

Hear a full version of Love is Around Me

Pentagram –Under My Thumb (Acetate) 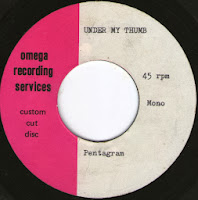 Pentagram –Under My Thumb (Acetate) Omega Recording Services (1973 US)

Apparently this copy is one of only three acetates made of Under My Thumb for initial radio play. The later 2-sided single release was limited to 200 copies and was their third release following Be Forewarned and Hurricane. Anyhow Macabre/Pentagram became much later known as inspirational doom merchants, however this 1973 recording finds Bobby Liebling and band showcasing a more commercial aspect to their art. Bobby’s startlingly pure yet edgy vocals along with the twirling lead and rough and ready riffing make this a stellar performance in my book; updating the song yet, keeping its original intent and feel. It is worth remembering that the band only really released their first LP in the 80s, however their early 70s recordings often achieve a perfect balance of Proto Punk with heavy rock leanings (even reminding me of the MC5 at times).

Rarely has a rock documentary shown the rock bottom in rock in such honest fashion yet been so moving. The difficult journey from Junkie pulchritude to a semblance of near normality is gutsy yet heart-warming, like a more hardcore version of the Roky Erickson documentary (You’re Gonna Miss Me)

Hear a full version of Under My Thumb

PS: If anyone can help with a copy of the regular issue of this single, please let me know
Posted by Robin Wills at 3:59 pm No comments: