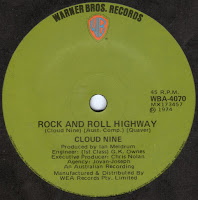 Cloude Nine was an Aussie Boogie/Glam band that eventually signed to RCA releasing a couple of singles and one LP (We're Just Good Friends…So Rock On) with its iconic sleeve. 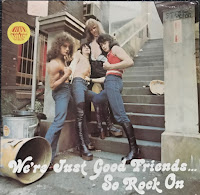 However before signing to RCA they released this single on Warner Bros. Both sides are exclusive to this release, but it’s the B side that is of more interest

Although not ground breaking, Rock And Roll Highway is a perfect example of an uptempo Aussie melodic rocker with Glam tendencies. Of particular interest is the slap-back delay that gives the lead guitar a Groovies feel. The A side is OK Pop, no more, no less

Following their stint on RCA, Cloud Nine then morphed into Taste with some tasty releases on Bootleg, and Philips

Hear a full version of Rock And Roll Highway 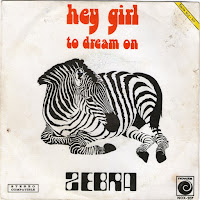 Spain is not usually known as a land of predilection for Glam infused crackers. Rare examples include Burning, Norah (although Argentinian by birth) and Noel Sotto (Hello Hello) , so it was a nice surprise hearing this for the first time last summer in LA while on the way to a record store (thx Noah)

Hey Girl is not an outright Glam Cruncher, but has a Glitter Beat underlay over which streams a delightful melodic tune with many  neat touches such as the Smoke (My Friend Jack) guitar sound and Popsike harmonies. Hey Girl is a top tune and performance regardless of genre.

Zebra had pedigree as formed by ex Los Bravos members (who quit before this single) and had a quite a large output during their tenure from 1971 to 1976.
I have not heard anything else by Zebra, but if there are any other gems in their catalog, it would be nice to know 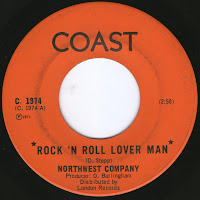 Canada’s Northwest Company are probably best known among collectors for their debut Garage Punk double-headed monster Hard to Cry/ Get Away From It All from 1967, but the band persevered until the early 70s and released several other singles of note, including this fine outing from 1971. Rock ‘n’ Roll Lover Man chugs along in fine rockin’ fashion and features some neat west coast harmony singing that is grounded by the tough and rugged playing which differentiates it from more usual rural Poco -like fare.
The B side is also great, more intricate in terms of arrangement; it features a killer short lead break among other unexpected twists and turns.
More info here: http://vancouversignaturesounds.com/hits/rock-n-roll-lover-man-northwest-company


Hear a full version of Let It All

Posted by Robin Wills at 1:58 pm No comments: