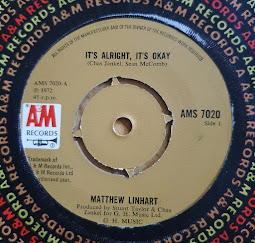 A few weeks back an unnamed acetate was listed as Glam on ebay, but with a modicum of research it was found to have actually gained an official release

This single was a side project of future Blockhead Chas Jankel when he was a member of Byzantium. Based on Matt’s comments on 45Cat, https://www.45cat.com/record/recorduk101 this is the background

“I met Chaz J. Through his girlfriend and he asked me to record some demos after just hearing me sing in his car one day... had a ball for 18 months, but record companies have short attention span and without early success for ‘It’s Alright’ they dropped me. I moved to Australia and went into advertising where I’ve been happy ever since. Kept singing in various pub bands for the joy. Life is just a bowl of cherries! Matt Linhart”

Both songs are kinda Barrelhouse Glam Boogie numbers. Piano Driven with raspy vocals and a crunchy beat, you can position It’s Alright, It’s OK somewhere between Bronx Cheer and Geordie. In fact, this single ends up neatly sandwiched between the 2 Brother Susan singles

Hear full versions of both songs