Clem East -What Are you Trying To Do To Me! 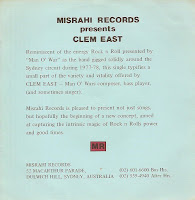 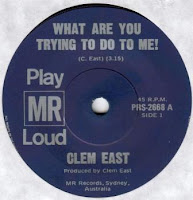 Clem East -What Are you Trying To Do To Me!/ Jupiter -MR PRS -2668 (197? Aus)
What Are You Trying To Do To Me! Is a corking Punk 'N' Roll track which kinda of reminds me of Get Out Of Denver twinned with Jim Carrol. It's full of attitude with squealing NYC-type vocals and a blistering Deniz Tek-like guitar break. The other side, Jupiter, is 6m 30 long! It's starts off quiet and subdued and turns into this near-Stoogean Blow-out. No idea whatsoever who Clem East is/was or who plays on the killer single. it's an Australian release, but apart from that, there's zilch in the way of info on the Web...

Add -on: Those kind folks at Vicious Sloth have provided an insert that came with the single...anyone want to ring the number provided? Ha...
Click on title for an edit of What Are you Trying To Do To Me! and Jupiter or try the player below... 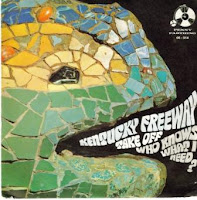 Kentucky Freeway –Take Off/Who Knows What I Need –Penny Farthing 06-014 (1972 Spanish issue)
This is the Stamford Bridge gang ( John Carter/ Peter Barnfather) ploughing their way through a nifty Glam/Boogie Groover that increases in intensity as it goes along. The song literally "takes off" around the 1m25 mark when an army of massed Kazoos!!!! overpowers proceedings. The track then really comes into its own and includes a welcome return of the Kazoo army. Real fun and catchy stuff!
Click on title for a soundlip of Take Off
Posted by Robin Wills at 7:44 pm No comments:

Walkers –Fire/ All Right All Right 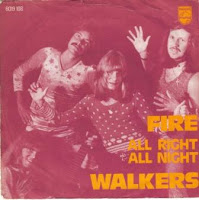 Walkers –Fire/ All Right All Right – Philips 6019108 (1973 DK)
Denmark's Walkers were nothing if not prolific. It seems they released around 22 singles, but this one must surely rate as the best 2-sider of the lot. Fire is a fun and slightly dorky romp sounding like Chicory Tip morphed with Alexander Graham Bell era Sweet with a bit of T. Rex in the vocal inflexion department. Pure Bubbleglam...All Right All Right on the other hand is a great rocker with a fabulous riff and compares well with the best rockin’ Raspberries’ material –it’s that good.
Thanks to Tony of Crazee Kids for pointing me towards this one.
Click on title for an edit of Fire and All Right All Right
Posted by Robin Wills at 10:14 pm 6 comments:

Zips –You’re So Good To Me 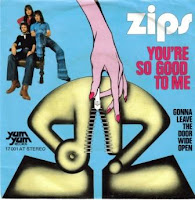 Zips –You’re So Good To Me/ Gonna Leave The Door Wide Open –Yum Yum Records 17001 (1974 Ger)
This is Pip Whitcher and Roger Lomas (Sorrows/The Eggy/ Renegade) with Adrian Baker covering the Beach Boys’ track in a more distinctive manner than the versions by Johnnie Ricco or Design released around the same time. The Adrian Baker Beach Boys fxation and Teen angle is nicely counter-Balanced by the ballsy guitars and thudding beat. Zips also released a so-so version of Bye Bye Love on RAK with a solid rocker called Evil Hearted Woman on the B side…With the weather turning somewhat for the better expect some more Surf/Glam crossovers soon…
Click on title for a soundclip of You’re So Good To Me
Posted by Robin Wills at 12:23 am 6 comments:

Whistle –The Party Must Be Over 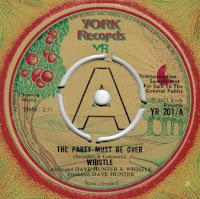 Whistle –The Party Must Be Over/Hideaway –YORK YR201 (1973 UK)
Whistle's single is probably the 2nd best Glam era Cruncher on the York label after Abacus' Indian Dancer. The Party Must Be Over also shares a similar unusual song structure with Indian Dancer: The intro is drawn out (no bad thing), there’s only one verse, but the chorus is an endearing hand-clapped-sing-along which is followed in turn by more riffage, a guitar solo and a repeat of the chorus as an outro. There's a second Whistle single on York -has anyone heard that one? Any info on the band?
Click on title for a soundclip of The Party Must Be Over
Posted by Robin Wills at 12:07 am 5 comments: 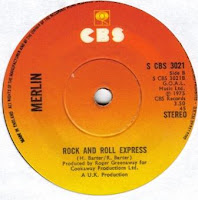 Merlin –What A Funny Way To Fall In Love/ Rock And Roll Express –CBS 3021 (1975 UK)
Merlin were a bit of a Schizoid act, their album is an over-produced and patchy affair alternating between Hard Rock, Glam and overtly commercial Pop with a little Prog thrown in…The A side in fact appears under the title Look At Me on the album, but the B side is exclusive to this release. Rock And Roll Express is probably their best performance and it’s a suitably meaty and crunching number with some neat power chords, handclaps and snotty vocals. As a song, it doesn’t really go anywhere, but it hurtles down the track quite nicely.
Click on title for a soundclip of Rock And Roll Express
Posted by Robin Wills at 8:14 am 5 comments:

Snatch -For Always And Ever 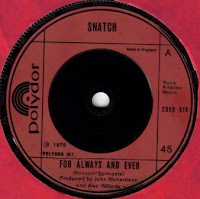 Snatch -For Always And Ever/Hunting Kind -Polydor 2058619 (1975 UK)
For Always And Ever is a cover of the opening track of The Glitter Band's Rock 'N'Roll Dudes LP. The meaty guitar and top tunage turn this performance into a fine Powerpop/Glam crossover. Snatch's only claim to fame seems to be that the drummer was the brother of The Rubettes sticksman...and in fact John Richardson and Alan Williams produced this release and wrote the B side...It's still to be confirmed if there's a 2nd Snatch single on Polydor.
Click on title for a full version of For Always And Ever

Maria –Clap Your Hands And Stamp Your Feet 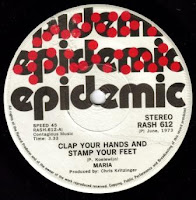 Maria –Clap Your Hands And Stamp Your Feet/Out Of My Mind –Epidemic RASH 612 (1973 SA)
In my quest to own every version of CYHASYF known to man, I now present you with the South African version! It’s a sprightly remake of the Bonnie St. Claire/ Pete Koelewijn classic, with fine backing vocals chanted by what sounds like the remnants of a pacified Zulu nation embracing Glam…Perhaps the strangest aspect of this release is the name/ look of the label as it could be pass for some 80s Indie label and not the output of the Apartheid regime in ‘73. One day I hope to have 12 different versions of this song (any from Asia?…there must be!) which would be the excuse to release an album called " I Want To Teach The World To Clap Their Hands And Stamp Their Feet"
Click on title for a soundclip of CYHASYF
Posted by Robin Wills at 12:45 am 6 comments: