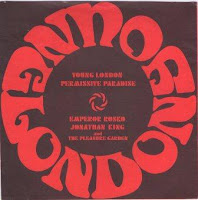 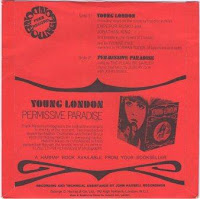 Young London Permissive Paradise –Young London/Permissive Paradise –SFI 31/32H (1969 UK)
This was a free promotional flexi disc put out to promote the Young London –Permissive Paradise book of late 60s swinging London featuring photos by Frank Habicht. Side A is fun listen –with old codgers giving their impromptu insight on youth culture with star appearances from Jonathan King and Emperor Rosko. The B side is a really good fuzzy psych track and it has only recently become clear that The Pleasure Garden was in fact The Iveys moonlighting for the sake of a session fee. The song is not an undiscovered Pete Ham gem, but was written by Jeremy Cox and John Sidey
The things you find when trawling through record fairs bins in the Midlands...
Hear a full version of Permissive Paradise as performed by “The Pleasure Garden” (The Iveys)


Hear a full version of side A
Posted by Robin Wills at 2:36 am 3 comments: 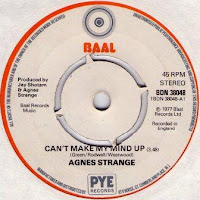 Agnes Strange –Can’t Make My Mind Up/Johnny B. Good –Baal BDN 38048 (1977 UK)
Agnes Strange was a great Hard Fuzz outfit out of Southampton comprising of Dave Rodwell, Alan Green and John Westwood. Agnes Strange were primarily known for their Strange Flavour LP released on Birdsnest who also released the killer Give Yourself a Chance as a single. Can’t Make My Mind Up is a later non-LP release, and although not as frenetic as the aforementioned single, it still packs a mighty wallop albeit on a more firm yet stomping level. Dig those hand claps....the track is somehow caught in limbo between Hard Boogie, Glam and NWOBHM.
Johnny B. Good is well... Johnny B. Good as you expect it to sound, but delivered in quite excited fashion.
Hear a full version of Can’t Make My Mind Up

Hear a full version of Johnny B. Good

Lazy –Let Me Down Easy 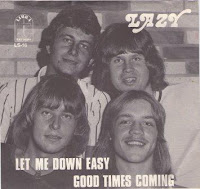 Lazy –Let Me Down Easy/ Good Times Coming –Libra LS-16 (1977 DK)
I picked this one up a couple of weeks ago in a bargain bin on the strength of the cover and Danish origins and it is only now that I got round to actually spinning it. Don’t know anything about this lot, perhaps their only release? To me Let Me Down Easy is like the (US) Marbles attempting 2-4-6-8 Motorway with a healthy dollop of Carpenters. The vocalist has a classic pop voice, really endearing. The B side is if anything better; rougher and more sprightly, the outwardly poppy-ness remains also with the bonus of hand claps. Undiscovered Powerpop genius or run-of-the mill Continental Pop fodder? –you decide... 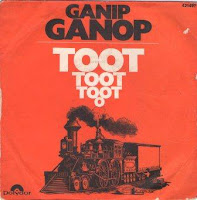 Ganip Ganop – Toot Toot Toot (Hear The Whistle Blow)/ The Toot Toot Song –Polydor 421497 (1969 French issue)
Just to alleviate the heaviness of Bonehead, I give to you Toot Toot Toot- an enthralling Bubblegum ditty that is as dumb as it is disposable. Totally infectious it hits all the spot a real Bubblegum classic should. In the sterling tradition of maximising the minimum; the B side is the A side but without the vocals. Ganip Ganop (anyone remember the game?) is the creation of Howard Bogess and Neil Goldberg (who were also behind Linus and The Little People) and on this evidence they have nothing to envy from Resnick/Levine... 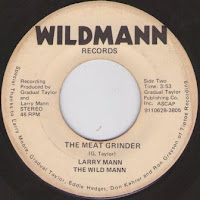 Sleazy Dirty Ass Boogie time with Larry Mann (The Wildmann!) “I wanna grind you in the back of my car...” spouts Larry and you wouldn’t want to end up doggin’ with this chap around either with or without his chainsaw...
The presence of Gradual Taylor probably places this one in Ohio. Stranger still; the B side is performed by Will Begley and The Poor Boys and is a country/rockabilly number full to the brim of innuendos but of limited interest musically. Really need more information on this one –anyone?

Hear a full version of The Meat Grinder

Posted by Robin Wills at 3:59 pm No comments:

Armada –Just For You 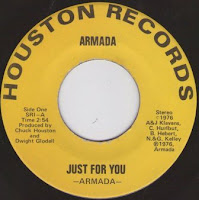 From Framington (Ma), Armada was a high school band who became a pretty successful cover band. It appears that this is their only release, but there is actually a Myspace page up with some live tracks and line-up information: http://www.myspace.com/armadathebandthatmoves

Just For You falls somewhere be Boston RAT era rock and more overt Powerpop. The chorus really reminds me of the Rich Kids for some reason. Get Ready Get Mean is tougher and wilder insofar as approaching US Proto Punk/Glam NYC style...All in all a great find! 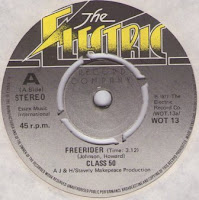 From Stud Leather to Mustard via Legs, Jeff Smith and Jet Staxx and including this weird but truly great oddity (Class 50)

Dahcotah - Too Easy To Love 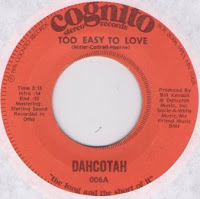 Dahcotah - Too Easy To Love/She’s a Bore –Cognito 006 (1976 US)
Dahcotah was an Iowa based combo who had been around for a few years, before experiencing their own road to Damascus, in this case Kansas, by the means of a Mott The Hoople gig! OK, we’ve had Geoff Appleby with Hey Sadie http://purepop1uk.blogspot.com/2008/02/geoff-appleby-hey-sadie.html but this cranks The Hoopleness up a few extra notches...It is full of Marionette twists and turns, the Ian Hunter approach and Piano could not be more (real) life-like, but the song itself stands up in its own right. She’s a Bore is less Mott, but more ROCK with a cool Cheap Trick feel. If nothing else these guys had taste, aptitude and attitude. There is a facebook Dahcotah page up- I’ll send them a note...
Hear a full version of Too Easy To Love

Hear a full version of She’s A Bore
Posted by Robin Wills at 10:40 pm 5 comments: 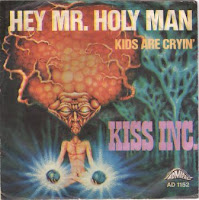 Kiss Inc. –Hey Mr. Holy Man/Kids Are Cryin’ –Admiral AD 1152 (1972 German issue)
Inspired by the Gregorian chant Dies Irae as interpreted by The Mec Op Singers (Belgium), i Samurai and Formula 3 (Italy) and finally covered by Swiss band The Shiver as Hey Mr. Holy Man in 1969, prior to this later version by Kiss Inc. ( Stephen Sulke). Hey Mr. Holy Man is as atmospheric as it is thumping, the voice over is neatly European, and the fuzz is all encompassing before its abrupt turn of direction for the run out. A bizarre but captivating single that’s really out there. Enjoy both sides as Kids Are Cryin’ is nearly as bonkers ...
Hear a full version of Hey Mr. Holy Man
Hear a full version of Kids Are Cryin’
Posted by Robin Wills at 1:00 am 1 comment: