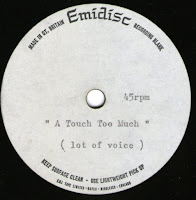 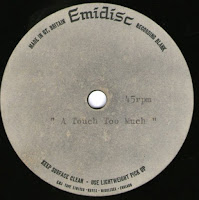 Here is the original demo of The Arrows’ first hit Touch Too Much ( listed here as “A” Touch Too Much) as originally presented to Alan Merrill and co. All vocals and instrumentation are handled by Mike Chapman
What strikes you, when hearing this early run through is just how focused and fully realised this tour-de-force is. Mike does a credible American for an Aussie, the blend of electrics and acoustics is splendid, while his backing vocals are more Sweet than Arrows.
Mike probably recorded this at home on a Revox 4 track, but the sound is clear and pristine. I have also heard a lofi copy of Mike’s rendition of The Arrows’ Toughen Up which is also pretty cooking, so it would be great to hear more demos of other ChinniChap classics…
Hear a full version of mix 1 of Touch Too Much 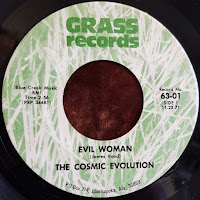 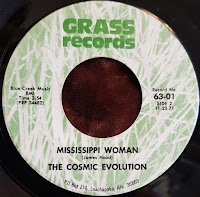 Out of Loachapoka (current population 199) these good old Alabama freaks deliver a cracking woman themed double-sider. For sheer dumbness the B side edges it for me. Based on a Heavied up Frankie Lee Sims via Groovies Married Woman backdrop, The Cosmic Evolution convey their crotch felt ode to the next state’s talent… “Mississippi Woman –What a Love Machine, Mississippi Woman –Don't you know what I mean…” Priceless
The A side is more “organ” driven…with a more direct lineage to late 60s Heavy Psych. Evil Woman is a top draw rocker featuring a fine array of grunts and top fuzz guitar licks.

Any info on these guys?

Derringer – I Luv Myself –Obscure US Hard Rock 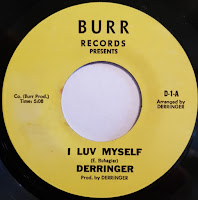 Another mystery combo. The only provenance I can work out was that the band was probably from Lansford PA as the Burr label as an outlet for local pastor Raymond Burr who also released the Starfyres Captain Dueseldorph / No Room For Your Love single back in 1967. These are the only two releases on the Burr label as far as I can see, but I am not sure if there is any other link with the Starfyres. I Luv Myself is a pretty good hard rock number, solid but not overly wild in its delivery. I assume the date is around 72/74 judging from the Johnny Winter-like guitar effects with a bit of Alice Cooper thrown in. The B side is lazy insofar as they didn’t seem to have been bothered adding any lyrics and it goes on (and on) for 5:42…

Hear a full version of I Luv Myself