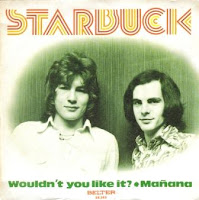 Brian Engel and Martin Briley camp it up to the max on Wouldn’t You Like It, but the track doesn’t quite reach the ridiculous “heights” of Do You Like Boys or have the sheer class that permeates Heart Throb (check out the April 21st post). This Howard/Blaikley track is not without its own particular charm or duck sound effects for that matter…
Brian: They (Howard/Blaikley) had run out of good ideas and soppy innuendo titles by this time and were resorting to gimmick sound effects ...I honestly remember a duck quack on this single…..but I don’t remember it being released...
Maňana is like DDBM&T covering Rag Doll and plays it more straight in a commercial pop vein. Brian: Maňana was an old Bay City Rollers song (I think we did it either first or round about the same time). Now that was a good pop song…International appeal, a catchy song with a chorus that you could sing but didn’t need to learn…Na na na Na na na na na -if you could remember those lyrics you’d got the song”

Wouldn’t You Like It is probably the 2nd Starbuck single (RCA 2350 in the UK 1973) as Heart Throb on Bradleys came out the following year. It seems that there might even be a fourth single released as Starbuck: “Excerpt From A Skateboard Symphony” on Axle Production which ties in nicely with the later Slick Willie single (see review June 5th)

Thanks to MJ and Brian 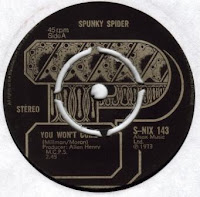 Spunky Spider –You Won’t Come/Perchance –Phoenix S-NIX 143 (1973 UK)
Spunky Spider’s only single is a strange and sticky beast indeed. It Comes across like Robert Calvert posing as a Sex Pest with a pre-pubescent Status Quo on this no-holes-barred performance. You Won’t Come certainly doesn’t spurt an attractive melody, but the snotty nosed Punky/sleazy approach is quite startling. Remember, this is god-knows-where in 1973 and not a dingy Squat basement in 1977.
Perchance is more 1967, and sounds like a band rehearsing for their set at the Avalon Ballroom and is more of an "open-minded" concept. There is zilch in the way of information in the liner notes of RPM’s Glitterbest Comp where I first heard it, but the cavernous lo-fi production values means that there probably was a real local band behind this release. Both tracks are written by Millman/Moran and it’s produced by Allen Henry. If that’s any clue…

Click on title for edits of You Won’t Come and Perchance
Posted by Robin Wills at 11:14 am 7 comments:

ALL SOUND FILES ARE ONLINE!!!!
Don't ask me how or why, but all sound files are available again. The old ones that I haven't replaced won't have the player at the bottom, but the sound clips are there if you simply click on the title.
Posted by Robin Wills at 6:01 pm 2 comments: 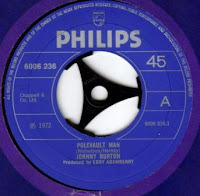 Johnny Burton –Polevault Man/The Polythene Doll –Philips 6006236 (1972 UK)
Polevault Man is one of those out-of-period numbers, although it came out in ’72 it sounds more like 1968. It’s a bouncy little number on the border of Psych and PolkaGum with some snazzy fuzz. I first heard this track on one of those Circus Days comps and its chorus and lyrics just stuck in my mind. It’s quite a moral tale in fact, as a boasting Johnny recounts his exploits of jumping ahead of Mr. Average to add to his conquests, but he gets his comeuppance in the end…
Vocally, Johnny has a certain Scouser stance in his raspy delivery, but who is he? There’s a Johnny Burton who has a single Come On, Dance With Me/ Slave Girl that is collectable in Northern Soul circles…But is it the same Guy?
Click on title for a soundclip of Polevault Man
Posted by Robin Wills at 4:15 pm 3 comments: 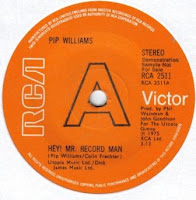 Pip Williams's name seems to pop up a lot on many noteworthy Glam era singles. Often working in tandem with Phil Wainman (including the early Sweet singles), he was often employed as a session muso, arranger, musical director and producer. Hey! Mr. Record Man is one of his rare forays as a solo artist. Produced by Phil Wainman, the track is basically Bo Diddley goes Glam and comes off much like The Arrows Toughen Up, but with Pip spending much of the tune searching for the right note to sing...The lyrics of the song are (and I quote) "a gentle satire on some of the more intense people he has met in the business". But Pip doesn't even get close to nibbling the hands that feed him...

Click on title for a soundclip of Hey!Mr. Record Man 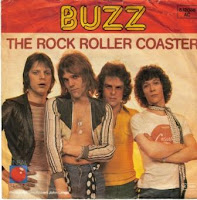 I've put some singles up on ebay including both Buzz singles, Paul Cass, Bubbles, Electric Banana, Saft and many others.
You can click on the title to go straight to my listing, or use the URL below...
http://search.ebay.co.uk/_W0QQsassZpurepop1uk

Good luck!
Here's an edit of The Rock Roller Coaster by BUZZ 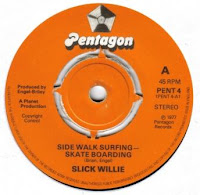 Tying in nicely with Kingsley Abbott’s piece on Skateboarding in the new issue of Record Collector, here’s a cool UK cash-in on the Skateboard Craze that whipped kids into a frenzy of cracking their elbows and dislocating their knees in the mid 70s. Slick Willie is in fact Brian Engel and Martin Briley (God…. they seem to be popping up everywhere at the moment) and the A side is one of the better examples of this sub-genre. It has a mean guitar riff and the catchy track rocks out quite nicely indeed, a bit like Alan Carvell if he had bollocks... Not quite up to the standard set by the Shambles single, but a cool release all the same. Further adventures of Brian and Martin coming soon....

Posted by Robin Wills at 8:39 pm No comments: 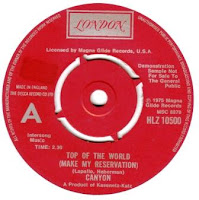 While going through the darker regions of my hard drive, I came upon this track which is definitely worth hearing in its pure non-edited glory...

Bubblegum Kings Kasenetz-Katz put their clout behind the unique single by Canyon. The approach is similar to Ohio Ltd (Wham Bam), but it is now ’75 and we are moving closer to Ram Jam (Black Betty) territory with this fine hard rockin’ Glam Boogie work out.

Play It Loud and Play It Proud!


Thanks to Tony of Crazee Kids, I have added more sound clips to old posts: