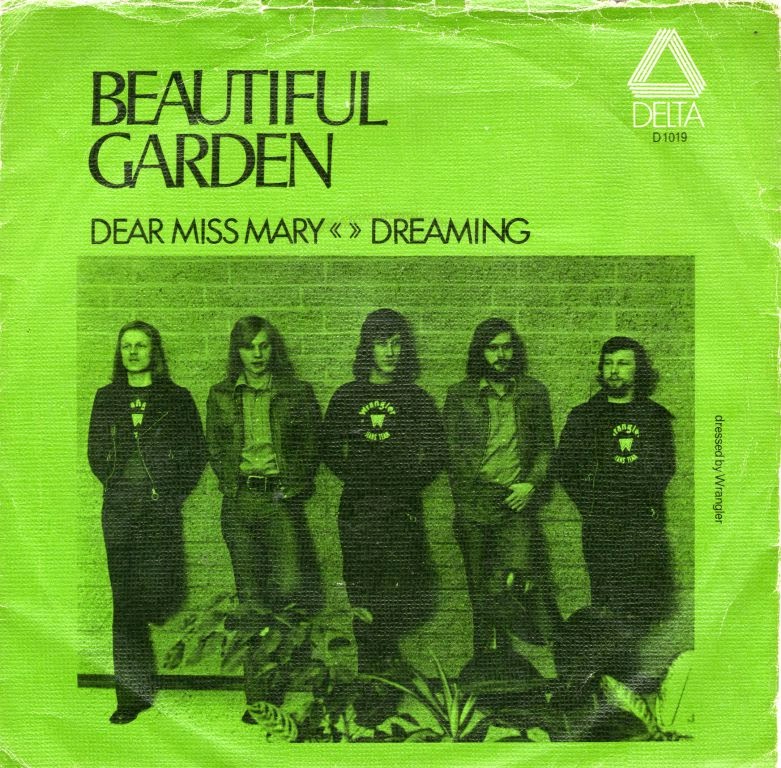 Here’s a real Purepop number with the emphasis on stomping quirky Pop. Dear Miss Mary featuring lead vocals with a strong Bowie/Tigers on Vaseline delivery adding a Glam element especially when also considering what sounds like clog stomping underpinning the beat. There’s also some nice Fuzzy guitar over the strong melody widening its appeal. Dear Miss Mary was written by Alan Decker (Left Side’s bass player). Beautiful Garden was from Schoonhoven, with the band’s name being a direct translation of their hometown. The band was Dick Hegeman (lead vocals), Ron de Wit (bass guitar), Gert v.d. Lagemaat.(guitar), Gerrit Bohré (keys) and Cor Gravestein (drums). It looks like this was the first of 2 singles the band released 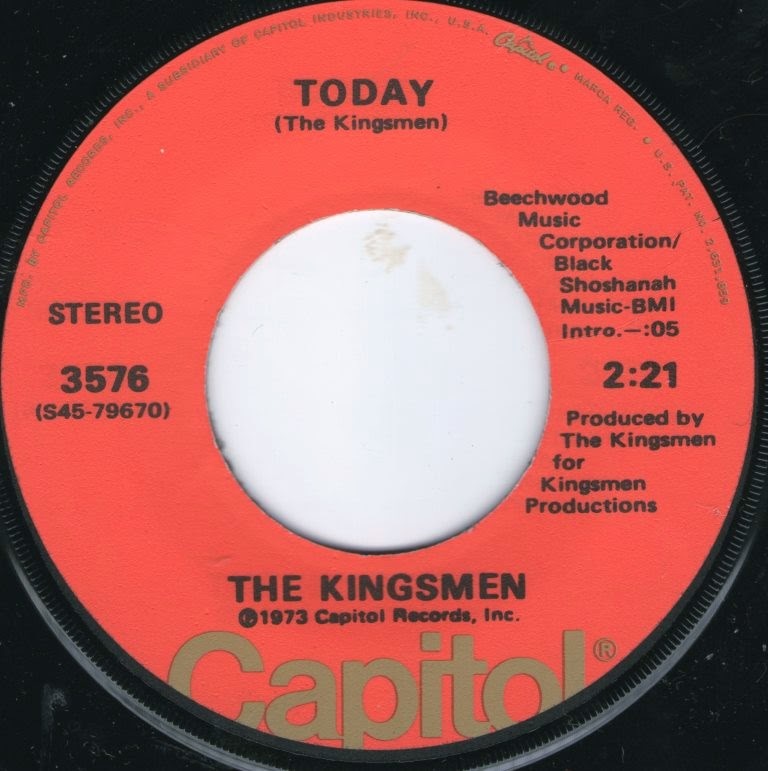 This single came out a long way along The Kingsmen career. It seems that by 1973, they tried to actualise their sound  away from the Jolly Green Giant/Louie Louie workouts towards a more contemporary Hard Rock sound. Not sure what permutation of the band was behind this, but on this B side Today they rock out in a surprisingly assured manner with some fine lead guitar. You Better Do Right is also good, more melodic  like a cross between the Raspberries I’m a Rocker and a convincing Bob Seger number.

Hear a full version of Today

Hear a full version of You Better Do Right 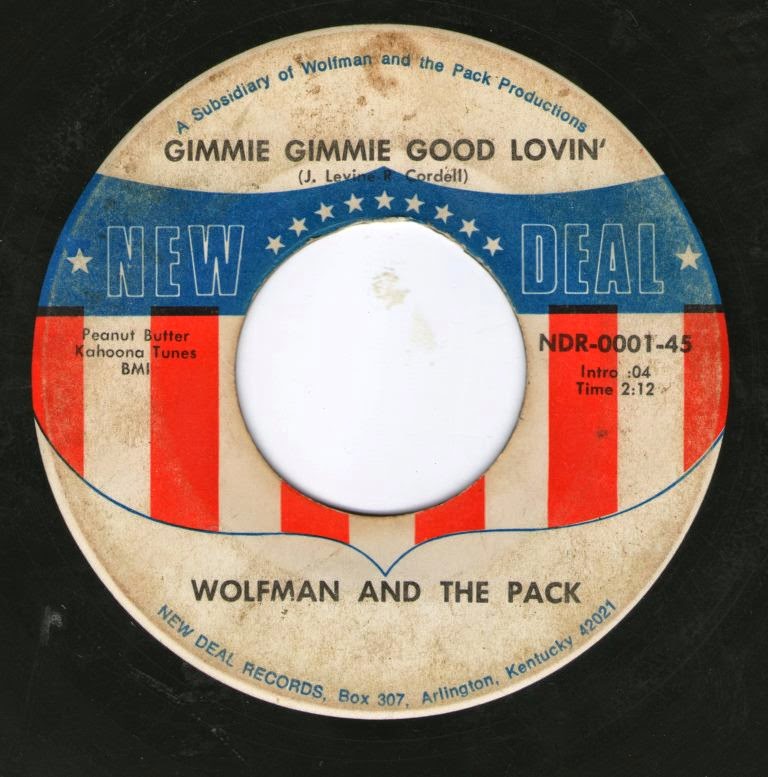 From the wilds of West Kentucky, comes this spirited cover the Crazy Elephant hit. It’s raw and rockin' and features some killer guitar from the 1 minute mark making it the perfect mix of Bubblegum and Hard Rock. Wolfman and The Pack was a long serving outfit featuring Robert “Wolfman” Crider on Guitar and lead Vocals, James Stanfill (bass), Gary Holder on drums and Lannie Wall on the cutting lead guitar. There also had an album out on New Deal as well as another single on Century Records "Give Me Back What's Left of My Heart". The Wolfman passed on a couple of years ago

Time’s Up: The TNS story 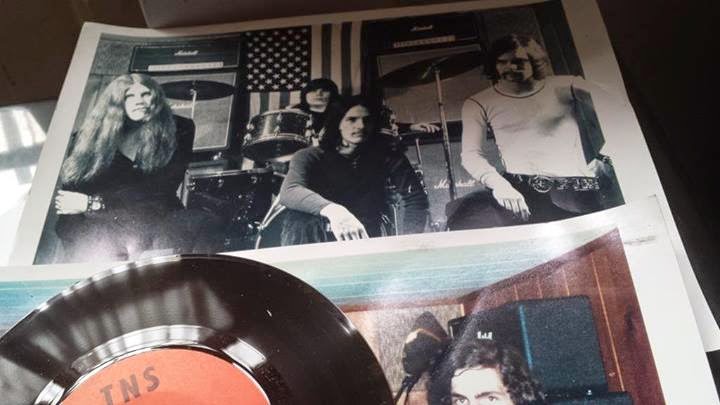 Posting on Purepop sometimes helps to uncover fascinating back stories to hitherto unknown but key releases. In this instance the band members were blown away that their sole private label single was being talked about over 40 years after its initial release and contact was made. The original review can be found here http://purepop1uk.blogspot.co.uk/2013/06/tns-times-up.html


Time’s Up is a a remarkable no holds barred overdriven Michigan Rock Classic and the archetypical example of the perfect Proto Punk performance. Following a couple of calls with drummer Dave DeHoog, here’s the lowdown
TNS were born as a trio comprised of Dave DeHoog (drums/lead vocals), Steve Barkwell (bass) and guitarist Randy Nichols. Based in Grand Rapids, the band was formed around Dave and Randy’s friendship. After trying out another couple of guys they met Steve (bass). He didn’t play an instrument but really wanted to be in the band, so Steve went off to buy a Silvertone bass and Randy taught him some basic moves. Dave: “After 6 months he learned so much that we put him in the band. He just took right off…” In 1971 they auditioned Al (lead vocals) who then joined the band
﻿﻿
﻿
They were known as The TNS Blues Band from 1969 onwards heavily inspired by UK Blues Boom acts such as Chicken Shack or early Fleetwood Mac. But why the name TNS? The reason screams out attitude…Dave: “Originally we would play anywhere including wedding receptions and our music didn’t fit that kind of thing and we were done being yelled at during wedding receptions because the music was too loud. TNS stands for Take No Shit! We are the Take No Shit Blues Band and we are going to play what we want, where we want and we are going to play as loud as we want…”


The change from TNS Blues Band to simple TNS was not due to a shift in direction or even a concerted decision, but due to practicality and graphic design issues! Dave: “There wasn’t room on the label for TNS Blues Band!
Although heavily inspired by the UK blues sound, Michigan/Detroit high energy wasn’t far away Dave: “We used to go and see the MC5 about twice a month, we loved Wayne Kramer and Dennis Thompson, but we weren’t really aware of The Stooges and never saw them. Detroit was about a three hour drive away and there was a lot of talent there…”
The sound on the record is incredibly raw with an exemplary guitar sound. Dave: “When we got to the studio there were 2 engineers. We started rolling in those 100 W Marshall stacks in and that one dude didn’t want anything to do with us and left, so we were just left with one engineer…” That lone engineer did a great job in capturing the performance with the amps cranked up to maximum to get the overdrive and sustain needed. The band played the tracks live in the studio and added the vocals later.
The recording of the single was the only record session they did, but there is a live ¼”  tape waiting to be uncovered. Their live set included other originals as well as some choice covers such as MC5’s Ramblin’ Rose or Alice Cooper’s Return of The Spiders along with more bluesy material such as Taste's  Catfish Blues or Messin With The Kid. I hope that we will get to hear this live tape one day.
Time caught up with TNS and although they remained friends; by 1974 the band started to dissolve due to other commitments taking precedence. Now 40 years later, TNS are gaining wider interest. Time’s up has since shown up on Michigan Meltdown Volume 2 and may be making another appearance on a Numero group compilation. But there’s still nothing quite  like playing Time’s Up as it was intended on a glorious 45.
Thanks to Dave DeHoog
Hear a full version of Time’s Up
Hear a full version of Telling Your Fortune
Posted by Robin Wills at 3:04 pm 2 comments: