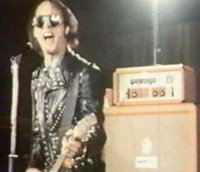 Amazing video of The Groovies in ’72 playing Slow Death. This is just so cool. Catch the threads and the attitude! No sound at present, but hopefully this will soon be remedied
http://www.youtube.com/watch?v=A_otct9_iGY

Thanks to JL for this–Be sure to check out the Flamin’ Groovies France yahoo group: http://fr.groups.yahoo.com/group/FlaminGrooviesFrance/ 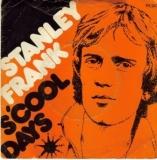 This single is a HIT and boy does it ROCK! This release was sadly overlooked and didn’t get the airplay to make the charts or even achieve cult status…Perhaps it would have stood a better chance if it got released 3 years earlier as the guy’s hair wasn’t spiky enough for the times. The single is as close to perfection as you can get. The lyrics spell out TEENAGE RAMPAGE albeit delivered by a Canadian in his 20’s…The chorus is sprouted out à la Get Out Of Denver, so many words, so little time….There’s no air to breathe. The compressed handclaps and drums make this sound like a Mike Leander/ Vic Maile collaboration, … nothing is superfluous and everything counts: From the dut dut dut backing vocal mantra, the one note piano pounding, the driving guitars. The tune itself is killer- a hook-filled powerhouse of a single. Stanley Frank later released a cover of Cold Turkey and an album in 1980, but by then the urgency had gone. A one-off wonder to be cherished, shared and danced to! (you can find copies of this cheap on ebay -go for it!)

You can hear the song here: http://www.stanleyfrank.com/ 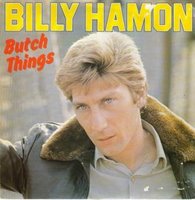 Now this is completely NUTS!!!
Imagine The Cramps with Bryan Ferry singing with a fist down his throat at half speed and that’s just the sound…the lyrics oh god…here are the first 3 verses…Make of them what you will!

And all the sweet young things who wish to join in
riddled with acne and the blemish of a pale skin
your ears too big and your legs too thin, oh no

And, oh, the butch things they ain’t never been kissed
they’re much too busy getting kicks from a thick fist
what the tongue’s never tasted the mouth don’t miss, oh no

The B side is pretty wild too and Billy comes across as an amphetamine loaded Punk Rock Heinz, great clanging guitar and amusement arcade FX

Somehow Andy Mackay produced this gem and once you’ll hear it…well, you will never forget your first Billy Hamon experience in any case. Billy was a bit –part actor on British TV and I don’t think he released anything else…please correct me if I’m wrong

If you can’t find the single, Butch Things appeared on the fine Glam Rock comp “Glitter From The Litter Bin” Sanctuary CMQCD675 -2003 (UK)
Posted by Robin Wills at 12:46 am 12 comments: 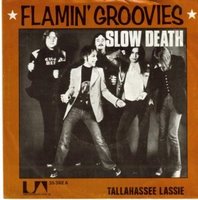 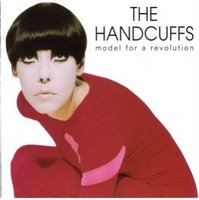 The Handcuffs is the new venture from Brad Elvis (Elvis Brothers) and Choe F. Orwell. They both headed Big Hello who made 2 great albums and some wonderful live performances in a high energy female –fronted Cheap Trick mode. The Handcuffs stand proud above the stagnant molasses of today’s emasculated scene. Think Pop, think Power with a sprinkling of updated garbage and glam
All Shine on is possibly their most beautiful song and performance yet...to the light (reminds me of Poltergeist). Personally, I see dead people...Can't Get The Girl would be a great single -fantastic production. Check out the video at http://www.thehandcuffs.com/. Peggy Moffitt is really bouncy and gorgeous...like my favourite ladies. love the little dut dut dut bit. Great song, performance and production (even the weird bit). It brings a big grinto my face when I listen to it. Sex and Violins is clever and fun with it's tongue planted firmly between 2 cheeks...Stradivarius positions indeed! Excellent! First Bossa Nova Somehow reminds me of Indiscreet period Sparks. Beg Me Beg Me is nice and sleazy, but as always FUN....real catchy chorus. Jet Baby could be another real contender for single status, if they could edit it down to 3:20...
The album hit rate is really good, the performance and production are spot on. It's really great to have them back. 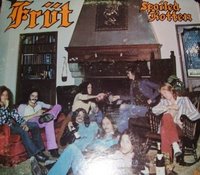 I originally picked this one in the mid- Seventies during my quest of finding that buzz I got from Slow Death, Teenage Head or the Grease EP etc…This was Detroit’s Frut 2nd release. The first one was OK, but at least 5 tracks from this aim to share that same space as the rockiest tracks from Flamingo. The album kicks off with a fine version of Ruby Baby. The crunchy rhythm guitar is there, but the vocals come across like a tamer Roy Loney. There’s also nice rockin’ piano. Still it’s a cover and it doesn’t quite set the world alight. Track 3 is a good version of You Can’t Sit Down. It is really starting to sound like Frut had been as much influenced by The Groovies as they themselves had been influenced by The Detroit scene. Would have fitted nicely on Supersnazz. Track 4 and now we are talking! Gimme What We Got has really got it… From the Tim Lynch licks, the tight handclaps and the singer is really cutting loose. It’s an original and bodes well for the other tracks such as… You Just Gotta Have What It Takes is another near killer –cool rockin’ original…The vocals are wild, the guitars cut and rip, but there is one element missing: Danny’s drumming…Nearly, but not quite there. Side 2 starts with probably the best track: Snatch N’ Grab It. The rhythm guitar bites and is loud, the vocals are nice and snarly, the lead guitar is a bit too dry though. The album ends with Prison of Love . The performance is nice and sweaty and but doesn’t quite reach Groovie territory. The remainder of the album is mostly made up of covers ( 16 candles, Peggy Sue, Sea of Love), but the band come across more as a stoned Sha Na Na on these numbers, all good fun but not too memorable. Still you HAVE to love a band with band members called Crunchy Crystals, Panama Red etc…Remember this was 1972, you had The Groovies, The MC5, Stooges and not much else and this album sits nicely just behind those guys as second??? line Rock N’ Roll contenders for they are a real Rock N’ Roll band and I recommend picking up a copy if you find one. ebay purchase April ‘06

Well here goes…I never thought that I would review stuff again, but with The Barracudas currently in semi-hibernation, I find myself groovin’ to music made by others. I have been picking up tons of stuff recently: From rare girl group tunes to obscure glam stompers along with lashings of new Power Pop releases…You’ll find it all here…Without fear or favour
Posted by Robin Wills at 11:26 pm 2 comments: