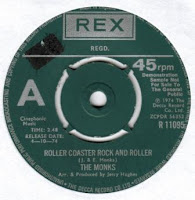 Surely, this is not the same Monks who did Nice Legs, Shame About The Face??? Both songs are written by J. & E. Monks, so it’s obvious that someone with a reputation to preserve is hiding here! Being on Rex they must be Irish...
Roller Coaster Rock And Roller is a nice rockin’ update of Sweet Little Rock ‘N’ Roller but it somehow comes across like a Woolworth imitation of Dave Edmunds with the monkey-beat chugging guitars and treated slide. The vocal delivery gives it a slight teen angle, but the lead break is rather piercing …so I’m unsure of the demographics this single was aimed at. It would be nice to be able clear up this mystery…anyone?
Hear a soundclip of Roller Coaster Rock And Roller
Posted by Robin Wills at 2:22 am 1 comment: 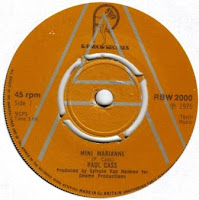 Mini Marianne is a vibrant high-velocity Glam Cruncher. The production is full and tight, it has an incongruous Synth part and fun lyrics including a choice line about making Coca Cola jellies…The B side is also an uptempo rocker, but not really in the same league.
So who is Paul Cass? It’s probably a Belgian creation as it’s produced by Sylvain Van Holmen (sometimes spelt as Van Holme) who was in The Wallace Collection and Two Man Sound, but beyond that who knows?
Thanks to Bob from the http://www.7tt77.co.uk/ site for turning me on to this baby
Click on title for a full version of Mini Marianne
Posted by Robin Wills at 8:48 pm 1 comment:

Shelby The Clap –Killing My Music 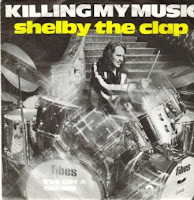 Shelby The Clap –Killing My Music/ I’ve Got A Chance –Polydor 2050 356 (1975 NL)
Holland has been a very fertile breeding ground for Junkshop Glam with killer releases by Pantherman, Dump, Black Fire, Left Side, Heavy Dwarfs, Zingara, Cardinal Point etc…(and dear Bonnie St. Claire). This Shelby The Clap single was one of the very few remaining Dutch Glam obscurities to be unearthed, which leaves me with two more to find (as far as I know).
Shelby is in fact Shel Shellekens who drummed with The Incrowd, Brainbox and Rainbow Train. He later produced the Golden Earring album Cut in ’82 which featured the US hit Twilight Zone.
Killing My Music is an ultra-compressed Mutoid Glam number, it stomps with the best of them, but the production is bizarre and renders it even more interesting. Shelby: The Dutch Cozy Powell? –yes certainly, but one immersed in space-yoghurt! The B side is also pretty groovy as Shelby and his shinny kit expand the Junkshop envelope even further…
Click on title for edits of Killing My Music and I’ve Got A Chance
Posted by Robin Wills at 5:33 pm 2 comments: 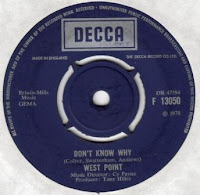 West Point – Don’t Know Why/Take What You Want –Decca F 13050 (1970 UK)
With near identical drum intros, both West Point songs are fine commercial Bubblegum/Soul concoctions similar to The Equals or Paintbox with Take What You Want being my favourite of the two. I'm unsure who the band actually was, but Don’t Know Why has a Swettenham credit, which most likely relates to Peter Swettenham from Grapefruit as I also have another single by Fluff ( Dance Dance Dance/ Don’t Say You Don’t – Decca F 13273) from 1971 produced by him.
Click on title for an edit of Don’t Know Why and Take What You Want
Posted by Robin Wills at 1:30 pm 2 comments: 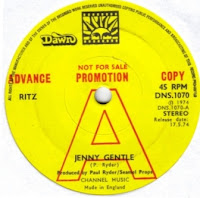 Ritz –Jenny Gentle/ Why Love–Dawn DNS. 1070 (1974 UK)
I’ve had this single for a while and when I took it out for a spin recently, I realised that I had never listened to the B side! And boy did I miss out as Why Love is a cracking Glam cruncher with a definite Sweet influence featuring guitar riffage in the same mould as The Easybeats’ Sorry. Jenny Gentle is more subdued, but is a prime catchy-as-hell commercial Pop song, with some tasty dual lead guitars. Both songs are written by P. Ryder and I assume that this is Paul Ryder who also served time as Paul Ryder And The Time Machine (Penny Farthing).
In order to make further amends, Why Love is featured as the first edit of the two songs.
Click on title for edits of Why Love and Jenny Gentle
Posted by Robin Wills at 8:12 pm 3 comments: 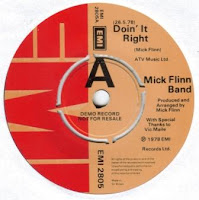 Mick Flinn Band –Doing It Right/ Do What You Wanna Do –EMI 2805 (1978 UK)
Incredible to think that this is the same Mick Flinn who was in The Mixtures (The Pushbike Song) and even more weird when you consider that he was also in The New Seekers! Both tracks are Killer Punk/Glam numbers with a great high -energy performance and tight production (it looks like Vic Maile was involved here). It seems that they were only demo copies of this single pressed, if you know otherwise -please let me know!
For further information, go to: http://45revolutions.blogspot.com/2007/10/mick-flinn-band.html
Click below for edits of both songs 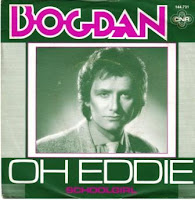 Bogdan? Bogdan who? BILLY HAMON of BUTCH THINGS infamy -that’s who! Not sure why he used this pseudonym, but Oh Eddie is truly the son of Butch Things. (see review posted April 27th 2006). Billy’s blubbering vocals are as unique as ever and the content here is similar to Butch Things with its 50s tough/whining guy theme. The musical assault may not be quite as overwhelming, but apart from a weak middle eight, the song is perfect –all light and shade...
The UK issue has a version of Reet Petite as the B side, this release has Schoolgirl which is a so-so Russ Ballard song.
Billy Hamon also released an album on Acrobat called Bombed Singles, would that complete the set?
Click on title for soundclip of Oh Eddie 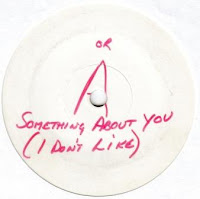 The Passengers –Something About You (I don’t Like)/Two Lovers –Private pressing (1979 UK)
I met these guys at the time outside the CBS building in Soho Square just as they were signing to Epic. They had pressed up this single privately in order to create a buzz and it worked as both tracks were later released on the faux-independent Blue Inc. and also on Epic proper. It looks like they were uncertain as to which song was to be the A side when they pressed it up, but in my book, there was no contest as Something About you is a powerful Punk/ Power Pop number of the highest caliber. To me it sounds like The Members infused with a top Pop tune and featuring a great rockin’ piano part such as Nicky Hopkins would lay down on those early Kinks sides.

Click on title for an edit of Something About You

As a dubious marketing exercise, I will also be listing this single on ebay http://search.ebay.co.uk/_W0QQsassZpurepop1uk this evening. It's the last single I will be listing until January -Thanks!
Posted by Robin Wills at 9:07 pm 6 comments: