off to the land of smelly cheese... 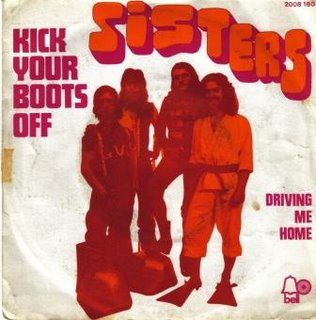 Hi
Well I'm off on holiday tomorrow, so don't expect any new posts until after the 5th of August. There's plenty more stuff to come though and perhaps I will even find some nice French pic. sleeves in between snorkling sorties...In the meantime, here's wishing you all the best and hope you'll be checking back when normal broadcasting resumes.

Until then, feast your eyes on this...a "cool" picture sleeve of the Glambastic first Single by Sisters -All together now: Kick your boots off, stomp your feet... on the floor...

All the best
Robin
Posted by Robin Wills at 10:01 pm No comments:

My version is better than yours Part 1: Don’t Let Go – Rats vs Light Fantastic 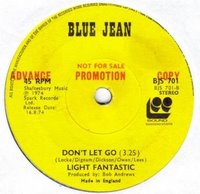 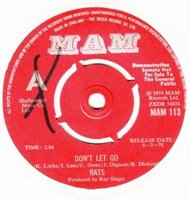 In the left corner we have RATS (no, not The Rats who released the wonderful Bolanesque Turtle Dove the same year) and in the right corner we have LIGHT FANTASTIC (who also released some OK stuff in the mid 70’s on MAM and Penny Farthing)

This is the original version released in February ’74. The first thing that strikes you is that it’s played really fast and perhaps too well. The drumming is not basic enough and is nearly “funky” during the verse. Things come together nicely during the chorus as the drums thump away simplistically and the vocals chant out the words with gusto. The solo is horrid –is it a synth or a sax? It sounds like a chicken pulled out of someone backside anyhow (makes a refreshing change).
It’s a great song, but this version just doesn’t deliver. The B side – Dragon Child is some form of Rockin’ progressive Jazz Rock fusion. It’s also played really fast and is somehow akin to Van Der Graaf Generator on speed…

Released 6 months later, this one is the bomb! Tempo?…check, handclaps?…check, loud crunching guitars?…check. The song really comes into its own here: It’s basic, but with a great production and nice touches (she said whispered) and it thuds along as it should. The guitar solo could be The Move, detuned guitar strings and all. A great song given its rightful rendition and …it’s only the B SIDE!!!! Take Me, Shake Me is the bastard son of Bend It and Bend Me, Shape Me with a bit of Silver Machine thrown in. It’s a cool Glam Stomper with another great production job from Bob Andrews. No doubt about it - Light Fantastic are the WINNERS with their fine coupling…

In the next episode of my version is better than yours –Top Down Time: The Dantes vs The Rockaways.

PS: You can find The Light Fantastic version on Boobs –The Junkshop Glam Discotheque- RPM 298

The Boston Boppers – Did You Get What You Wanted 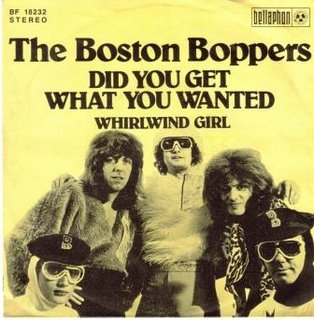 Strategically positioned somewhere between über-Kool and the land of Dork, The Boppers' only single is a great Glam Rock period piece, but with a severe dose of Kitsch.
Originally released on Penny Farthing in the UK, several pictures sleeves were issued around Europe using shots from the same photo session. And god didn’t Old Europe deserve the faux-fur and ski goggle look, it’s just a shame that it didn’t catch on down the snow-piste… Produced and co-written by Mike Leander’s mate Eddie Seago, the music fits the image perfectly, loud and thumping like a mutant Glitter Band with over the top vocals that at times approach Boris Pickett territory. The call & response and the chorus are supremely catchy and will haunt you forever. I bought this single when I was 14, and when I heard again for the first time again this year, I remembered every vocal inflexion perfectly.…Now where did I put my goggles…?

The B side is a good rocker , but in a slightly less OTT way. The A side can be found on Boobs –The junkshop discotheque RPM 298 (UK 2005)

Norris The Troubadour Seaboard Coastliners –I Am Back From Vietnam 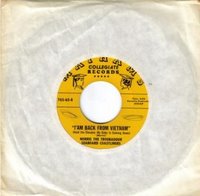 Norris The Troubadour Seaboard Coastliners –I Am Back From Vietnam / Mr. Guitar Man I know You Can -Mayhams Collegiate Records 765-65-9 (US 1970)

Hilarious single from the zany world of Norridge B. Mayham. This is one of those singles that I picked up on the strength of the title alone. I’ Am Back From Vietnam (Hold The Elevator My Baby Is Coming Down) is a deliciously amateurish performance with shifting tempos and an unusual song structure as the song just heads wherever it feels like going. Norridge has been in the business for over 30 years by then, click the link for full information on this guy.
Posted by Robin Wills at 10:04 am 1 comment: 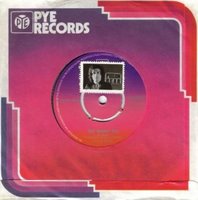 The A side is a real loud cruncher falling somewhere between Freakbeat and Glam. It has ’66 Yardbird strident guitar breaks, feedback and a raspy shouted vocal performance from an angry Mr. Bear who just had someone spit in his porridge. The song itself is pretty basic, not moving too far from a 12 bar structure, but it’s chant-like chorus of Gotta keep up the war against war is pretty effective. But who the hell is this guy???. This came with a nice picture stamp on the label…a cheaper option to picture sleeves anyhow…

Posted by Robin Wills at 9:30 pm No comments:

Jackal –Year of The Tiger 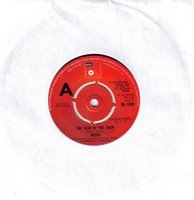 A bit of a strange one this, but a definite grower. Year of The Tiger is an atmospheric Psych/ Glam number with an over the top echoed guitar and an odd rolling beat. The background vocals are somehow reminiscent of Kung Fu Fighting, but this is no Disco record! Something must have gone wrong during mastering, as the top heavy mix hasn’t transferred well to vinyl and the top end is distorted on the record. They should have stuck with Ampex tape during the recording, or perhaps some BASF boffin was simply learning his chops with the cut. The Mastering Race? I think not…
The B side is a more straightforward rocker with a Lou Reed -Vicious –like riff, but adds a Hammond and Congas when they should have stuck with a trusted cowbell. Not sure who the band are, but I saw a mention that it could be members from Hull’s The Rats (Mick Ronson’s lot) 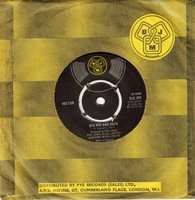 Bye Bye Bad Days is a blistering Glam/Punk performance and a worthy follow-up to their fantastic Wired Up single. It’s all you could ever want from a glam single: Loud guitars, a stomping beat, crunching handclaps, snotty vocals and a super chorus that comes on like the Bay City Rollers performing Jeepers Creepers in salute to Satan.

Bye bye bad days, gotta get back to those schooldays…

Also check out the link below
http://hector-band.co.uk 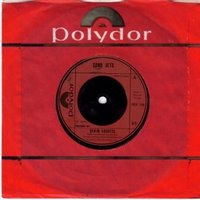 
Featuring Grant Stevens who would later front Razar in ‘77, Denim Goddess has a nice full production with cowbell, handclaps and an electric clavinet. The background vocals recall Mott’s Roll Away The Stone and Grant Stevens has a great voice with a very considered vocal approach. It all comes together very nicely, but it could do with a bit more grit and less polish. Denim Goddess is fine period Glam/Pop single with a very catchy chorus that makes it sound like an instantly recognisable hit. The Soho Jets released Hi Heel Tarzan as a second single, but I haven’t heard it yet.

Note: When you click on the link above you might wait a bit for the song to load