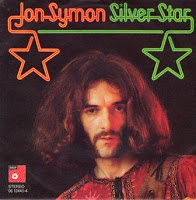 Jon Symon –Silver Star Part 1/ Silver Star Part 2 –BASF 0612441-4 (1975 Ger)British squaddie makes good! Following deployment with Her Majesty’s armed forces in Germany, Jon Symon AKA Rasputin set himself up as a one man band playing across Germany and Austria. Following the Sweet Eliza and Mighty Quinn singles as Jon Symon’s One Man Band (BASF) he released this grungy yet gleaming Proto Punk/Glam scorcher. Probably featuring a full band (or does he play all the instruments himself?) the guitars roar and squeal à la Thunders during the break and ably counter-balance any of the gloss conveyed by the backing vocals.
Jon Symon appears to still be playing in clubs these days; in fact there’s a pretty mean one-man rendition of Mona on Youtube. Apart from rockin’ out, the man seems to also have a penchant for the esoteric and dressing up in pirate gear... 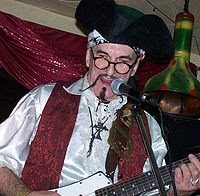 Update (from the horse's mouth) -Thanks Jon! Quite a stellar cast...

It's amazing what gets "dug up" here in Internet!!! I wanted to make a few comments  (if you're interested in getting Info from the "horses mouth" - one horse at least) *LOL*
I composed the number and played the Guitars (Rhythm and if I remember rightly) the rather simple solo! on the A Side. The Instrumental solo on the "B" side was Frank Dietz - a then very well known German musician. The Bass was played by none other than Georgia Moroder, who owned the studio where it was recorded (Arabella in Munich). The drummer was my manager Cliff Koch.
During the recording of it, I lost my voice and asked for a couple of days off to get it back! - This couldn't be granted 'cause the Rolling stones had booked the studio to produce "Goats head soup", so I had to come back 2 weeks later to finish silver star. This was really bad news, 'cause Munich is about 6 hours at the fastest from Hannover, where I live. When I arrived the second time I finished the vocals and was helped with the Refrains (shubedoos!!!) by Donna Summer - who lived upstairs in the Arabella House. I was produced in those days by Pete Bellotte (Giorgios business partner) Later they both emigrated to Hollywood and wrote and recorded the music for the Fritz Lang silent film "Metropolis" and Giorgia also wrote the music for "Flash dance". I carried on playing with my one-man-band in Germany until 2012 and I have my "First-night" with my new Band in a pub near Hannover on the 4th May. I hope to be Playing Silver star 'cause all my friends want me to re-record it!!! and found it to be a bit too simple, but I like it again now ;-)
all the best from Germany,
Jon
Jon Symon AKA "Rasputin
Posted by Robin Wills at 11:20 pm 4 comments: 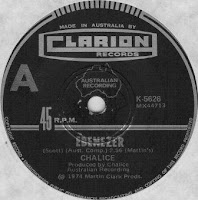 Chalice –Ebenezer/After The Goldrush –Clarion K 5626 (1974 Aus)
Chalice were based in Perth but were formed by a bunch of Mancunian exiles who released three singles on the Clarion label before moving on to Polydor where they released the Overflow LP and another 3 singles. They plied their trade primarily as a cover band, but based on Ebenezer, they could pen a mighty tune and perform it with gusto. Ebenezer is a prime example of Powerpop Boogie featuring slide guitar over a poppy yet rocking centre. If anyone has spares of their other two Clarion singles, please let me know as a trading opportunity would be most welcome. The B side is a non consequential cover of the Neil Young tune.
Hear a full version of Ebenezer
Posted by Robin Wills at 12:56 am 4 comments: 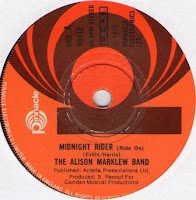 The Alison Marklew Band –Midnight Rider (Ride On)/Tumbledown –Pinnacle P8412 (1975 UK)
Reminiscent of Punchin’ Judy or Slack Alice; Midnight Rider rides along in rampant fashion. It has wonderful lyrics full of obvious double entendres, which position it perfectly into a non PC mid 70s mould. I couldn’t find any information on the band, but could there be a connection to The Kim Marklew Band? -They seem to be of the right age group...Anyhow, whoever they were - the beat thuds, the hands clap, the guitars roar... so all in all it’s a perfect Junkshop Glamster. Strap yourself onto this baby and enjoy the ride!
Hear a full version of Midnight Rider
Posted by Robin Wills at 10:36 am 7 comments: 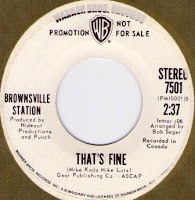 Brownsville Station –That’s Fine/Same –WB 7501 Promo (1971 US)
That’s fine is a great raucous post 1st album single-only track from these Boy Room Smokers. Arranged by ex System leader Bob Seger; the track conveys a snarly Michigan Garage Punk feel -just check out those lo-fi cavernous drums that propel the cool double lead vocal performance (is that Bob Seger “duetting ” here)? The track and performance really reminds me of Steppenwolf’s Who Needs Ya from the previous year due to the vocal tradeoffs and similar chug/ melodic verse structure. It’s easy to forget just how great Brownsville Station could be and this single provides ample evidence that it is worth venturing beyond their classic Yeah! LP from 1973.
Hear a full version of That’s Fine 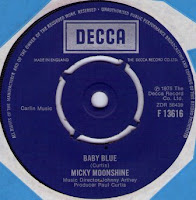 Micky Moonshine –Baby Blue/Baby Blue (instrumental) –Decca F13616 (1975 UK)
Originally released as the B side of the Northern collectable Name It You Got It (Decca F 13555), this issue is more of interest here as it also offers up a fun instrumental version as the B side. Micky Moonshine was in fact Scottish Beach Boy aficionado/artist Chris Rainbow and Baby Blue fits nicely within the Rock ‘N’Roll Revival/Glam crossover stylee (think Carl Simmons/ Mike Douglas with a sprinkling of Alvin Stardust). It’s has nice loud guitars and slide, a thumping beat along with a determined sounding lead vocal.
Hear a full version of Baby Blue
Posted by Robin Wills at 12:48 pm 3 comments: 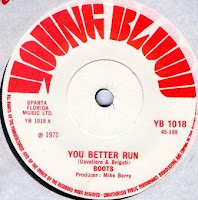 Another sterling Mike Berry production! The single came about as the publishing company Sparta Florida owned the rights to the Young Rascals number, but the song had to be released commercially in order for the publisher to retain ownership. Mike Berry was a big Young Rascals fan and had placed How Can I Be Sure with Dusty Springfield. The band on the session were The Gregorian Chant(s) from Coventry where Mike discovered Ning and Fresh Maggots (round the corner in Nuneanton)
MB: “The name Boots came from talking with Chris Welch (Melody Maker). We were thinking up stupid names for bands and the name Boots stuck in my mind...”
Note these Boots were NOT the Boots who released a couple of singles on CBS in ’68.

It’s a cracking version of The Young Rascals classic, with some blistering lead guitar; over-saturated much in the same way as on Machine by Ning. It’s an all round rousing performance with a great lead vocal. The band composition A to D (not the Small Faces track...or was that E to D?) is a brooding underground number again with some strong but less fuzzy guitar. The talking clock is a fun touch. The tracks were probably recorded at RG Jones or Radio Luxembourg.

Hear a full version of You Better Run

Hear a full version of A to D


David Bown from The Boots (Gregorian Chant), sent in his memories and these cool shots...Thanks Dave! 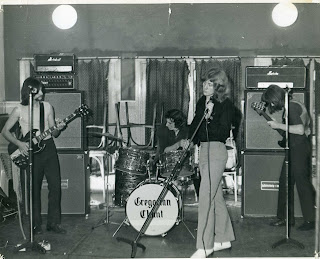 We were a young bunch of very enthusiastic semi pro musicians writing our own songs, playing pubs and clubs striving to make a career in music. We met Mike Berry and he arranged for us to record the Young Rascals “you better run” in the Luxembourg studio behind the Hilton Hotel. After the release of our record, ( which incidentally was the YOUNG BLOOD labels follow up to Indian Reservation by Don Fardon , Don was also from Coventry) we wanted to make music a full time career. Unfortunately at the time Paul our drummer decided he didn’t want to go pro but stay as an accountant, at which he has been very successful to this day.
So brother Terry, Don Wright & I had to find a new drummer, we firstly found a power house of a drummer from Birmingham Les Fortnam, a really well accomplished drummer (ex Bob Cats of Blue Peter 1966 fame) Les played very much in a John Bonham style and could really lay down a solid beat. Les was a great drummer, he stayed with us a few months however due to a number of things, Mike B being one of them he sadly left the band.
Les was replaced by a very young more technical Steve Palmer (young brother of Carl Palmer of ELP fame) at the same time we drifted away from Mike B and started writing and performing more of our own material and less covers. With help from John Tully “Inter City Artists” we started getting some good gigs, we changed the band’s name to Children, a bit soft this, so soon after the band’s name was changed again to Canyon. We played some great gigs around the country, supported a lot of top rock bands and were offered a few deals however nothing was ever taken up and after 18mths we split and all went our separate ways.
Don went to teachers training college, Steve joined a band called Heaven and has had a good career in music, I went back into engineering and didn’t join a band again for two yrs, the only one of the original Gregorian Chant “BOOTS” band who made a career in music as a pro was my brother Terry, he played in numerous groups both in the U.K., Germany etc and eventually lived and worked in and around the Los Angeles USA area for over 20 years

Don, Paul and I did get together again 5 years after the original band split, be it semi pro working discos and clubs in a covers band - “Dave and the Sun” Ha! what a name, this band evolved into “JOKER” and with all new members I had another short spell full time, a covers band I enjoyed being in immensely.
By the late 70’s other than Terry the three of us were playing very little and by the early eighties we had lost touch completely. 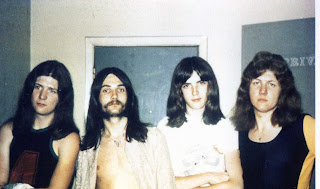 When I look back it was a shame the original band didn’t stay together and an even bigger shame that Canyon split, Don, Steve and Terry were and are three of the finest musicians I have ever seen, let alone worked with, we wrote some great songs together and its a real shame that we have no record of what we did.. Another guy I really enjoyed working with was the bass player in JOKER Rob McKenzie, he was also a great singer, when Joker split he wanted us to form a vocal duo, I wasn’t up for it at the time, I regret very much not having done that.


I suppose there are 1000’s of stories very similar to this one, I hope like me that the guys in those bands had as good a time as I did.
Posted by Robin Wills at 12:23 pm 9 comments: