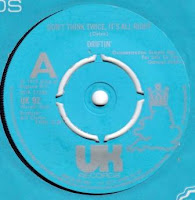 Driftin’ –Don’t Think Twice, It’s All Right/How I Cried –UK 92 (1975 UK)
One of the more ludicrous releases on Jonathan King's UK label (and that’s saying something!), Don’t Think Twice is simply incredible. On one part it has this Frankie Lymon/ Frankie Valli falsetto lead, but it’s mixed in with mellotron, handclaps and that flappy lips motor noise. Not sure what Dylan would have made of this update, but he was probably unlikely to believe that it would expand his demographics as The Byrds had done 10 years previous. The B side is lovely, starting off like a Rubettes backing track it then turns into some sort de-junglefied version of DDBMT’s Zabadak. Priceless...
Click on title for edits of Don’t Think Twice, It’s All Right and How I cried
Posted by Robin Wills at 2:06 pm 18 comments: 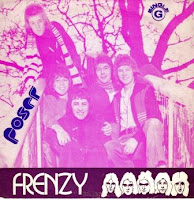 Frenzy -Poser/ Things You Do -DJM 00697588 ( 1976 Portuguese issue)
Poser is a fun Cruncher trapped between Glam and the birth of UK Punk, although I'm sure that overtaking The Bay City Rollers in the charts was their only goal. It was probably too yobbish to stand a chance to make it, but Poser would have been a perfect choice for the third Hector single rather than the planned Demolition. The B side Things You Do gets even closer to sounding like '77.
Click on title for an edit of Poser
Posted by Robin Wills at 12:47 am No comments: 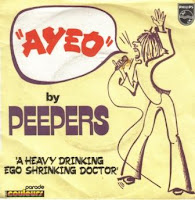 Peepers –Ayeo/A Heavy Drinking Ego Shrinking Doctor –Philips 6061 075 (1972 French issue)
Originally released in the UK on Bumble, Ayeo is a fun and rather silly Bubbleglam number that sounds just like you expect it to… You can almost hear the holiday-makers waving their hands above their heads, only their coach drove of a cliff on the way to the resort discotheque. John Carter is behind this release and Ayeo is a Carter/ Lewis/ Alquist composition with a nice dense and meaty production. All together now - AYEO, AYEO…
The B side is a pretty good rockin’ R&B track, which doesn’t quite live up to its title.
Click on title for an edit of AYEO
Posted by Robin Wills at 12:18 am 1 comment:

My Version Is Better Than Yours Part 7: Ascension Day Third World War vs Razar 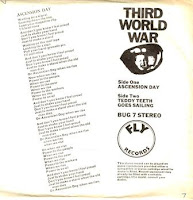 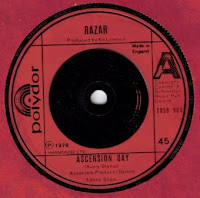 
Third World War were THE brutal-Prolo-Punk band in 1971. Formed by the UK's John Sinclair -John Fenton with Jim Avery and Terry Stamp as main protagonists, they somehow managed to get two incendiary LPs released at the time. OK, there were other UK Agit -Rock bands around the time (Deviants, Pink Fairies, Edgar Broughton Band), but these guys sounded like they really REALLY meant it. Ascension Day is just so Brutal, Terry Stamp's vocals sound like a diseased bull terrier who’s throat nodules had been removed with sandpaper... DON'T YOU KNOW I FEEL PROUD... The guitar riffage is supreme and I'm sure this is where Blue Oyster Cult borrowed the riff for This Ain't The Summer Of Love from.

7 years on and Jim Avery joined forces with Soho Jets main man Grant Stevens ( Denim Goddess) and presto, Ascension day "rises" again. Glam had come in-between both releases, and sure enough the drums really Blitz The Ballroom. They up the tempo, but it's not just Punk-by-numbers and the treatment is sufficiently different to make this new version worthwhile. Granted, Terry's gravel snarling performance could never be matched, but Grant Stevens has a great voice and updates the call to arms for the year O crowd.


Click on title for edit of both versions of Ascension Day.
Posted by Robin Wills at 11:34 pm 5 comments:

Funky Family -Part Of My Life 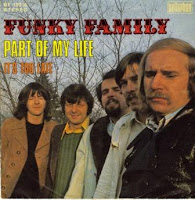 Funky Family -Part Of My Life/ It's Too Late -Bellaphon BF 18218 (1973 Ger)
I hesitate to use the word Glam, when looking at the photo of these guys. Although looking like some dodgy backstreet extras from an early episode of Inspector Derrick, they somehow manage to come up with a stirring crunching G-force performance all the same... and with a nice comb-over to boot! No wonder they used a photo of a blonde in hotpants clutching a sub-machine gun on the cover of their version of Bonnie's Clap Your Hand And Stamp Your Feet!
Part Of My Life is superb in every way: A great tune over a driving beat with really ace dual octave lead vocals and the lead break 3/4 through is pure Psych-Out and rounds off a top class release.
Click on title for a soundclip of Part Of My Life
Posted by Robin Wills at 8:46 pm 1 comment: 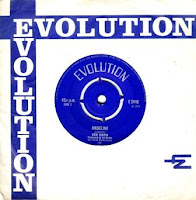 Dick Turpin -If You've Got The Time/ Madeline -Evolution E 2446 (1970 UK)
It's a total mystery as to the identity of Dick Turpin , but the B side of his (or their) only single is a class act indeed. Produced by Ed Welch, Madeline is a late Mod/ Freakbeat dancer with its gritty power-chords, pounding piano and sizzling lead break, but the switch in tempo with the Mott The Hoople piano motif is really surprising and takes this number somewhere else altogether. The chorus is simple as can be, but is really effective and totally memorable. The tale is of some guy traveling across the US doing odd jobs and the line I Got Mixed up with the racing crowd, but I won't be called trash is a real classic -put that in your NASCAR and smoke it! Madeline is not only my daughter's name, but of my favourite B side as well at the moment.
Click below for a soundclip of Madeline
Update: It looks like Dick Turpin was in fact Carl Simmons who recorded the Rock 'N' Roll Revival single Angel/ Hold On Ruby on Antic K11515 (1974 UK). He also wrote other songs with Ed Welch who was primarely a TV show songsmith (the incidental music for One foot In The Grave!!!)
Posted by Robin Wills at 9:10 pm 3 comments: 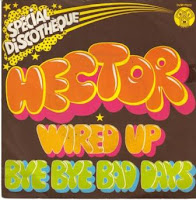 Click on the title or just go here: http://search.ebay.co.uk/_W0QQsassZpurepop1uk
Posted by Robin Wills at 5:57 pm No comments:

Left Side –Clap Your Hands And Stamp Your Feet 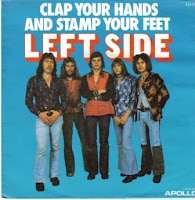 Left Side –Clap Your Hands And Stamp Your Feet/Be-Bop Baby –Apollo 613017 (1975 France)
This is a rare French only release by Dutch band Left Side (Like A Locomotion). Produced by Peter Koelewijn, this is in fact the same backing track as the Bonnie St. Claire version (you can even hear a bit of off-mic Bonnie at the end). Somehow it doesn’t quite have the same impact, apart from missing Bonnie’s vocals, the mix is perhaps not as powerful.Unless this is due to the mastering?
How many more versions of CYHASYF are still out there? By my latest count we have: Bonnie St. Claire, Left Side, Wild Angels, Funky Family, Maria on Epidemic from South Africa (1973), Fran O’Toole from the album Reflections Of Fran O’Toole (Mint Records 1976) and I presume that the Clap Your Hands Stamp Your Feet by Canadian Thundermug is also the same song…
More please!
Click below for a soundclip of Clap Your Hands And Stamp Your Feet
Posted by Robin Wills at 6:52 pm 4 comments: