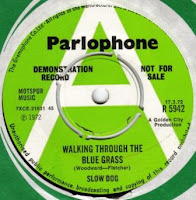 Slow Dog were probably a local Huntingdon quintet who's only release seems to have been this fine cover of this Staveley Makepeace tune. I use the words "probably" and "seems" as I can no longer find the link that had the band's line up.
Anyhow, Walking Through The Blue Grass walks the line between pure Norman Greenbaum boogie stomp and early 70s T.Rex with a mean DIY Fuzz and production throughout.The lyrics are silly and somewhat fruity...all peaches and nice "pears"... 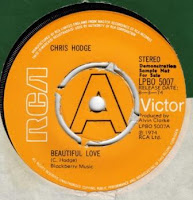 Chris Hodge- Beautiful Love/Sweet Lady From The Sky -RCA LPBO 5007 (1974 UK)
There’s very little in the way of background information available on the web on Chris Hodge. This is surprising as he released two singles on Apple including the US hit We’re On Our Way.
It seems he signed to Apple thanks to Ringo’s shared passion for sci-fi! We’re On Our Way was a fine slab of Psych/Glam with lyrics in some way similar to Paul St. John’s "The Flying Saucers Have Landed", but with more urgency and with less of a namby Pamby hippy approach.
He then released two great singles on RCA - My Linda (credited to The Sunshine Kid in the UK) and this one before moving on to DJM for the lethargic sub-Burrito I Love You/ Old James Dean. After that who knows…
Beautiful Love in no way sounds like its title would make you believe. It’s a hard-as-nails-riff–heavy Glam Cruncher. The intro comes across like a wild space age Crazy Horses and the thumping drums gain an extra edge thanks to the astute use of a gated reverb during the thudding drum break - Shake, SHAKE!!!
There’s a web page for Chris Hodge here www.chris-hodge.co.uk.It has 8 unreleased tracks on top of the 10 he released at the time.
Click on title for an edit of Beautiful Love

Monsoon –Night Of The Fly 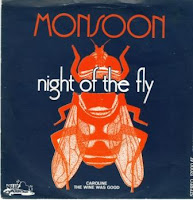 Monsoon –Night Of The Fly/ Caroline The Wine Was Good –Blue Mountain 12000 AT (1972 Dutch issue)
This is one weird Eddie Seago (Boston Boppers, Crunch etc...) artifact. I’m not at all sure what Night Of The Fly is actually about or has to do with falling in love, but this web of intrigue is finely supported by the music which features some neat fuzzed up guitar over a strange and haunting melody. It’s all wonderfully spooky and definitely all good! 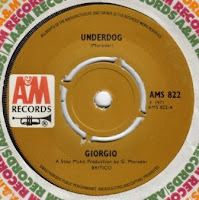 Giorgio –Underdog/Watch Yourself –A&M AMS 822 (1971 UK issue)
Let’s stay firmly in mainland Europe for this next single, by the king of Euro-Pop himself –Mr. Giorgio Moroder. Giorgio’s pre-Disco career is just full of these little gems, with Underdog being perhaps at the top of the pile. Here, Giorgio sings and stands up for all the down-trodden (mustachioed or otherwise) guys who not only get shit from the boss man but get laughed at by prostitutes…
The song twists and turns and the arrangement is full blown to say the least. It goes from mad fuzz patterns, to driving string quartets to drum breaks (where the spring reverb is set to overload and the delay full tilt on feedback) along with the usual Chicory Tip analogue keyboard bleeps.
The B side is an incredible garage Punk tirade targeted at those mean men in blue and makes this single a perfect double-sided purchase –go find!
Click on title for a full version of Underdog

Walkers –Do The Yo-Yo 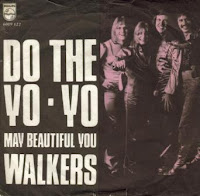 Here's another fine Euro-Stomper by Denmark’s Walkers. Do The Yo-Yo has the mother of all crunching beats but with one of the most simpleton-Bier-keller-Sing-a-long choruses you’ll ever get to hear-it even gives Jackpot (Is Everybody Happy) or Yellow Cat (Sissy) a run for their money! There’s also a strange vary-speed/Pitch change effect near the end, it sounds like someone simply sped up the tape manually at the mastering stage…very weird.