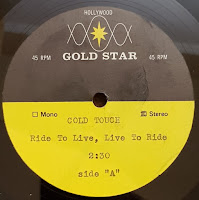 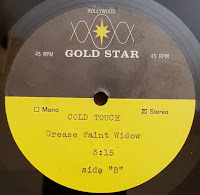 What the hell is this???!!! Out of nowhere (well LA actually), comes this totally insane unreleased acetate. The band Cold Touch just hit the nail over Bonehead with this Spazz  hybrid concoction of Biker, Punk and Hard Rock which reaches untold levels of perplexing Madness.

The vocals are incredible. The singer warbles, in a familiar manner –hang on is it Roger Chapman? No...Jesse Hector –No…in fact, it sounds like bloody Jello Biafra! However it is more than unlikely it's him, however could it be his uncle or something?

I have been told it is likely to be early 70s, however I have a feeling it might have been recorded during the LA Punk days. Who knows... Lyrically both tunes live up to their titles, really stupid but all so fun.

The A side is the Biker tune “ Satan is my father and mother unknown…” it twists and grinds along, steeped in grease and grime. The only issue is that a band member seems to have let the brother-in-law into the studio clutching a sax, which detracts somewhat from the overall perfection the track would have otherwise attained. Still you could try and convince yourself it’s a rare appearance by Steve McKay which can help...

Based on this the B side is the winner here, with no need to make any excuses. Grease Paint Widow is the hunter and you’ll also be the prey when you groove to this.
Please please please someone must know who this band were…

Note: I have had to edit both tracks slightly by fading each side a couple of times, I hope this doesn’t detract too much from the experience


Hear an edit of Ride to Live, Live to Ride


Hear an edit of Grease Paint Widow
Posted by Robin Wills at 12:56 am 3 comments: