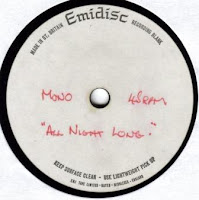 All Night Long/ Down On 42nd Street -EMIDISC Acetate (circa 1974)
Here are full versions of two wild slabs of Proto Punk Glam just oozing ATTITUDE. All Night Long was initially recorded by LA Glamsters Shady Lady and the original recording of All Night Long can be heard here: myspace.com/shadyladyrocks along with other tracks from their album that was unreleased at the time.
The track was written by singer Stefen Shady with guitarist John Christian. John left the band in 1973 and went to London where these two tracks were recorded in 73/74. The sassy vocals are handled by John’s wife Valerie. Both tracks are equally as good and are great examples of NY Dolls sleaze (with a bit of Quatro thrown in) and would have fitted in well with the burgeoning NY Punk scene, but definitely 3 years too early for the UK…I don’t know the name of the band, if anyone knows, please let me know.

Down On 42nd Street 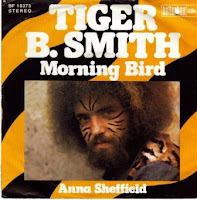 I had another amazing time at the best record fair in the world. 3 days of walking around, searching , finding, exchanging, meeting, eating chips "met" etc…and generally hanging around with that far away 100 yard stare. Picked up quite a big haul including the following: 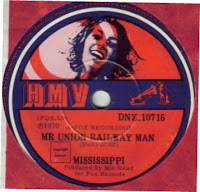 How on earth could this single, originally released in the UK on the tiny independent Fox label, get licensed and released down under in New Zealand on HMV? Very strange indeed…
Mr Union Railway Man is an out and out scorcher. Tight as can be; the track burst out at the seams and maximizes the minimum in glorious fashion. The cutting lead break is positively blistering and the echo on the vocals add a Freakbeat/Psych element into the mix. The B side Main Street also has some pretty nifty guitar and is another winner in its own right. This track was comped a while ago, but I have no information on who was in the band etc…
Click on title for an edit of Mr Union Railway Man and Main Street 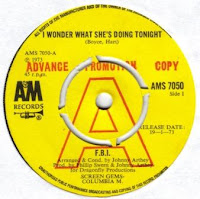 I Wonder What She’s Doing Tonight is a logical but bubbly cover of the Boyce & Hart hit (also on A&M), where a semi-Glitter beat and Leslie guitars subtly update the tune for 1973. This single is the work of producers Phil Swern and Johnny Arthey (The Pearls, Blue Haze, The Seashells etc…). and the promo blurb anticipated that the release would” find a warm reception with contemporary M.O.R programmers”. There’s nothing quite like aiming for the run of the mill whilst managing label heads’ expectations and achieving zilch…The B side is a fun piece of Bubbleglam fluff and is also worth a spin or two... 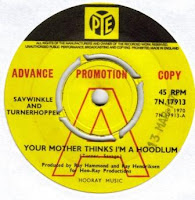 Savwinkle And Turnerhopper –Your Mother Thinks I’m A Hoodlum/Dirtyin’ My Thing- Pye 7N 17913 (1970 UK)
With a title that grabs the attention, Your Mother Thinks I’m A Hoodlum is a bizarre concoction on the border of Freakbeat albeit with a Dave Arbus soundalike on fiddle instead of having Eddie Philips style guitar moves. The underlying guitar goes for that Hey Gyp motif with bongos reinforcing the beat and the track does build nicely. Not sure about these guys commitment to The Revolution, but the lyrics are quite a hoot what with references to never hitting old ladies and paying taxes although wearing their hair long. It’s co-produced by Ray Hammond who managed The Fire for a while, but who were Savwinkle and Turnerhopper? Both tracks are credited to Turner & Savage…
This just in from Ray Hammond:
"Savwinkle and Turnerhopper were a duo I manufactured for a 'one-off' record deal with Pye.
The singer/songwriters were John Turner and Derek Savage, former leader of a sixties group from Battersea called 'The Saturday Band.'
When their playing days were over the pair started The Saturday Agency in Thayer Street, London W1 representing a number of artistes and bands.
I shared office space with the pair in 1969-70 and, as they were still keen to write and perform, I thought I'd give them an opportunity. Sadly, their efforts didn't win the public over."

Sharaton –Caught In The Act 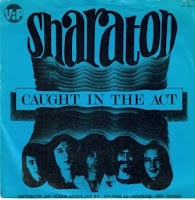 Sharaton –Caught In The Act/Spotlight –VIP VP 7483 (1974 NL)
Losing myself in total low land obscurity here… There is zilch in the way of information on Sharaton, the only clues are that both songs are written by Sharaton –E. Weiss and that Sharaton’s bass player was Andre Versluijs who was later in Diesel alongside Mark Boon of Smyle as well as playing in Carlsberg.
Anyhow, Caught In The Act is an up-tempo Punk/Glam crossover, but ends up being a confused beast. It’s been compared to The Angelic Upstarts meets Racey and I couldn’t have put it more eloquently myself…
Click on title for a full version of Caught In The Act