Cory Gun –Let’s Have a Party 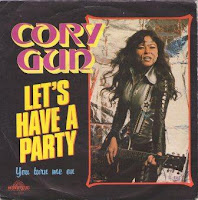 Cory Gun –Let’s Have a Party/You Turn Me On –Monopole S 1931 (197? Belgium)
With a tenuous grasp of English, Ms.Gun really gives her all and lets loose(Listen to those SCREAMS!) on Let’s Have a Party and comes across like Suzi Quatro with dollops of Brenda Lee twinned with Minnie Mouse over an updated Burt Blanca backing track... Cory Gun was a pseudonym used by Polish star Karin Stanek but god knows how she ended up on this Belgian production. The B side ain’t much cop though...
Party to a full version Let’s Have a Party
Posted by Robin Wills at 6:23 pm 3 comments: 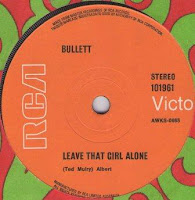 Bullett-Leave That Girl Alone / We Can Make It-RCA 101961 (1972 Aus)
Leave That Girl Alone appears to be the second single released by this Australian band. Based in Sydney, members included Alex Smith, Joe and Mario Azzopardi and others ... Please fill in the gaps someone! Alex Smith was with Francis Butler's 69'ers (see review August 13th 2008) and the Azzopardi brothers later formed family band Afrika. Leave That Girl Alone is a Ted Mulry composition, but I'm not sure if he released it himself at any point ... The track itself comes across like a concise raucous Quicksilver Messenger Service number filtered through a later date Easybeats grind. Not quite Twister, but pretty good...
Hear a full version of Leave That Girl Alone 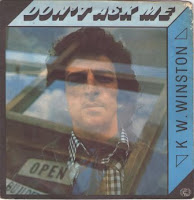 K.W. Winston –Don’t Ask Me/ Slow Rock –Sonopresse –AB 46900 (1974 French issue)
Found on the flip of the inconsequential Don’t Ask Me , Slow Rock is a fine sturdy instrumental that doesn’t have much purpose except to chug along in a tough fashion. There’s a drum break, for those who like that kind of thing, ¾ of the way through, but it doesn’t detract too much for the simple and single minded approach. Both sides are written by Jeremy Paul and Paul Lynton, who apart from credits on countless 70s stuff, were also the guys behind Hector’s Bye Bye Bad Days. Paul Lynton also wrote Wired Up and produced both Hector singles.
Stop Press: There was indeed a Hector connection! The same track was worked on by Hector as the unreleased One Ton Racer
Hear a full version of Slow Rock

The last day...had about 5 hours to go round the stands one last time. The atmosphere is more relaxed and subdued on the Sunday. Picked up the last bunch and headed home from where I am now writing this post...I'll need a few days to digest the records and the Frikadellen. Reviews of some of these soon...
Records bought on Sunday:
The Gants -I Wonder
Matadors -Come On Let Yourself Go -Jan Berry production
Souful Dynamics -Mademoiselle Ninette -Bubblegum -very Equals-like
Troggs -Satisfaction -French pic sleeve
Zen -Get Me Down (Hans van Hemert production)
Tiger -Crazy (Danish pic sleeve)
Neil Christian -She's Got The Power -French pic sleeve
Neil Christian -She's Got The Power -Dutch pic sleeve
Andy Bown -New York Satyricon Zany -French pic sleeve
Sorrows -C'Mon Everybody -Ger Pic Sleeve -yes the remnants of the very same Sorrows produced by Eddie Seago and John Rossall
Frog -Monie Monie (French pic sleeve)
Bonnie St. Claire -Voulez Vous -French pic sleeve (a trip to Utrecht isn't complete without a bit of Bonnie...)
K.W Winston -Don't Ask Me -French pic sleeve. Great B side instro called Slow Rock...more soon
Little Roosters -People Break Down -French pic sleeve
Streak -Bang Bang Bullet -Swedish pic sleeve
Thanks for Cass and Marjoleijn for the invite and Jos, Jeroen and Steve for the company...and to all the dealers for unloading their vans within striking distance 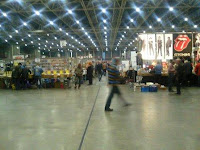 I slept in a bit and only got to the fair just after 9 (early entry passes are from 7am). I took a more leisurely walk up and down the aisles, but didn’t manage to complete the whole circuit before 6pm even when I only look at singles.
Slim pickings today, but I have my eye on a few higher priced items. Tomorrow is the day to go for those as many dealers halve the prices of their stock on Sundays.
Saturday’s purchases
Key West –Love Me Tonight. Power Pop. The B side, I’m being taken apart, is not on their LP.
Masterswitch –Action Replay –good tough Powerpop produced by Vic Maile
Spongetones –Now You’re Gone –Danish pic sleeve. Must be the same Spongetones …licensed to a Danish label in 1985.
Hansje-Automobile –nice cover on this Scandinavian issue
Walkers –Fire and Do The Yo Yo –both Danish issues
Iggy Pop/James Williamson –I Gotta Right
Versatility –Tequila Madness –No idea what this is…on President from 1975
Posted by Robin Wills at 9:23 pm 2 comments:

Friday is the day dealers set up for the fair. From 4am dealers queue in their vans and gain access to the fair area by driving directly in. The photo above is at 7:20am, dealers unload and those with early entry passes get the opportunity to get first inspection of the stock. There are approximately 500 dealers with stalls, and they all start unloading during the morning, so it’s a question of going up and down the area to spot the latest crate as it gets unloaded.
Friday is the day to get first pick and then it’s a case of revisiting, check out what you missed on Saturday and Sunday.
Good pickings today...
Airship –Get Out, Take Your Mother with You –Demo
Hammersmith Gorillas –You Really Got Me –Great German pic sleeve
Third World War –A Little Bit of Urban Rock –German pic sleeve
Carol Connors sings Yum Yum Yamaha (one sided promo record US pic sleeve) 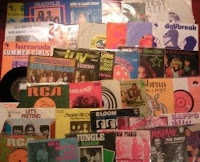 Not much else to report from the first day about from aching limbs from a 12 hour day and the odd culinary mishap…More tomorrow
Posted by Robin Wills at 11:21 pm 4 comments:

Got to Utrecht bright and early and went down to the Da Capo record store (http://www.dacaporecords.nl/) 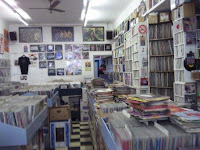 The store is run by Michel who is one of the most knowledgeable and friendly record shop owners around who also sports the latest in post-modernist Weller Mod crops. The shop itself is on two floors, the ground floor has LPs, CDs and singles. The back room is the “Singles Bar” where a wide selection of 45s are all neatly organised. The basement is “The Beat Cave” where everything is at 1 Euro…time and patience is required for there is a huge selection of stuff and there a jewels to be unearthed from the heaving mass. 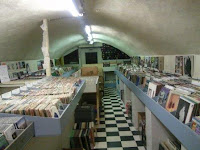 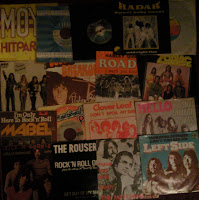 
Next is the 6am wake up in order to be at the fair for the dealer entrance at 7am…Ah, to have a hobby! 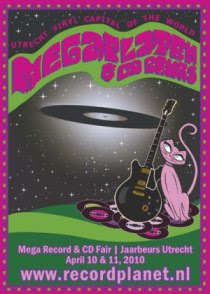 I fly out in just over 6 hours to the vinyl capital city of the world...I'll do my best to report back each evening with finds along with short & tall tales...
So lock up your daughters and Frikadellen, uncover those boxes of 45s... here I come...
Posted by Robin Wills at 12:39 am 1 comment: 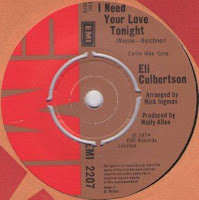 Eli  somehow found his way to the UK where he recorded this single at Abbey Road. Produced by EX Pretty Things Wally Allen (About the same time as his involvement with the Marcus Hook Roll Band) I Need Your Love Tonight judiciously merges the Elvis routine with a crunching slap-back Glam drum sound. It doesn't seem like Eli released anything else, but this single is a fine testimony to the potential of actualising Elvis to the realities of The Glitter beat in 1974. There's a great clip of Eli on British TV sweating profusely whilst incanting this number ...

Hear a full version of I Need Your Love Tonight