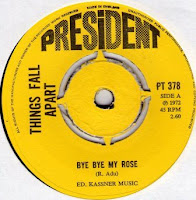 Things Fall Apart –Bye Bye My Rose/Manna –President PT 378 (1972 UK)
Nice N Heavy 3 chorder à la Move’s Do Ya. The Power chords have a cool overloaded metallic clang to them and there is some abundant OTT fuzz lead throughout. The chorus is surprisingly poppy for its surroundings, so you can file it somewhere between Freakbeat/Pop Rock and Crunching Glam. I have no info on these guys...
Hear a full version of Bye Bye My Rose

Firebeats –Klap I Takt (Clap Your Hands And Stamp Your Feet) 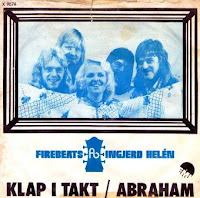 Firebeats & Ingjerd Helén–Klap I Takt/Abraham –EMI X 9074 (1973 Danish issue)
As part of my life’s calling to collect every version of Bonnie St. Claire’s Clap Your Hands and Stamp Your Feet released at the time; please find enclosed the Norwegian version. Ingjerd was one of Norway’s most popular artists during the 1970s. Here she is backed by The Firebeats (also known as Firebeats Inc.), who were a popular beat combo during the 60s.
Anyhow the Norwegian entry is not a must have, but for completists only. It’s cute rather than killer and is in fact rather anaemic overall, but Pete Koelewijn classic still shines as a great song whatever the setting.
Hear a full version of Klap I Takt
Posted by Robin Wills at 9:54 pm 4 comments:

Chalice –In My World 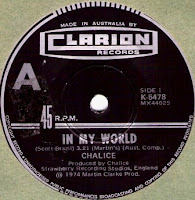 Chalice –In My World/Mr. Won’t You Help Me –Clarion K-5478 (1974 Aus)
Recorded in Manchester’s Strawberry studios, this was the first of three singles the band released on Clarion before a switch to Polydor. In My World (real MOD title that...) is a sterling Powerpop gem heavily indebted to 67’ era Who updated to 1974 in a similar way as the best Raspberries material. Bassist Les Brazil’s vocals are clear as a bell and the driving beat is neatly juxtaposed with some sweet Mellotron...

Neil Scott (guitarist): We recorded and mixed 4 songs in 8 hours during the session at 10 cc’s Strawberry Studios in Stockport ! In My World, the B side, Mr. Won't you Help Me, Ebenezer and There Will Come A Time which was never released. We used a session keyboard player - a girl who played Mellotron on In My World and piano and Mellotron on There Will Come A Time. We were all from Manchester but shortly after the session and back in Perth, we added an Aussie on guitar and keyboards and we bought our own Mellotron!

The song writing and overall performance is Purepop all the way and bodes well for the upcoming Chalice compilation on the revamped Zero Hour label. The B side is no slouch either... In My World was later re- recorded for their Overflow LP on Polydor 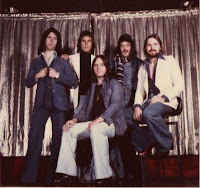 Neil Scott: We ended up in Perth because our agents in Warrington sent us to London to audition for a guy from Australia who became our manager once we arrived. He actually wanted Mud or Paper Lace but they weren't available, so I suppose we came third!
Hear a full version of In My World 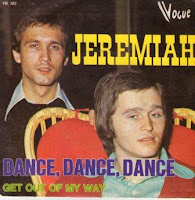 Jeremiah –Dance Dance Dance/Get Out of My Way –Vogue VB 382 (1974 Belgium)
Jeremiah are another bunch of likely lads from Belgium. OK, they have a slight Mutant Geek look (must be something in the Belgian water supply...Looks like they drank from the same well as The Garnets!), but musically they certainly give Lennart & Dagleth a good run for their money. Dance Dance Dance is a sprightly and vibrant rockin’ Powerpop tune -Duck Stab even noticed a vocal similarity with Chris Stamey...The B side is also a fast-paced melodic tune with monkey-beat chugging to the fore. I would love to know about this bunch, there is at least one other single with Jeremiah as a three piece...or perhaps they just decided to put their best faces forwards on this one?
Hear a full version of Dance Dance Dance
Posted by Robin Wills at 11:34 pm 1 comment: 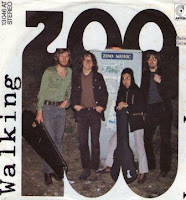 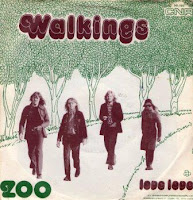 This is the Dutch Zoo (not the French one) with another prime example of the fine art of the Dutch foot stomp. OK, Walking doesn’t quite have the overall killer attitude of the best of Nederglam ©, but this marching sing-a-long is nailed down by the mother of all goose-stepping stomps with a slight Creedence ring to the guitar riff. So no hippie walk-about here then, this is heavy heavy Neder-thudding!

Zoo hailed from Groningen (The Venice of the North), from the remains of a band called Spring. At first they were known as Groninger Muziek Vereniging (Groningen Music Society), but Zoo had many line-up changes. Most of their songs were written by Eddie Meyer and Bert Veldkamp, but their most well known member was drummer Peter Walrecht who would later on play drums in other bands from the Groningen muic scene like Herman Brood & His Wild Romance, New Adventures and AA & the Doctors.
Their music could be described as prog, and they were influenced by The Beatles , Yes and Argent. In 1971 they played as a support act for Argent in Groningen. Later on they played the Paradiso and also did a TV-show. Zoo made 4 singles, of which Walking is the 3rd.
Walking was written by Peter du Bois and Peter Bewley who would later gain chart success with Lemming. They also made an LP for CNR in 1973 which contained no less than 6 Beatle covers!
Thanks to Jos for the background info!

Hear a full version of Walking 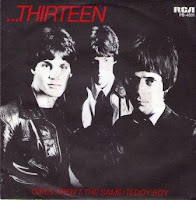 Thirteen –Girls Aren’t the Same/ Teddy Boy –RCA PB 4501 (1979 Dutch Issue)
Girls Aren’t the Same is a fine Powerpop performance which somehow didn’t gain a release in the UK at the time. The harmonies and guitars are spot on, although the instant melody/hook can become a tad repetitive after a few plays. The B side is the killer in my book. Featuring Ian McKean driving and cutting guitars, Teddy Boy rocks out in fine straight ahead Stones/Streak mode. Ian’s style is pure Rock N Roll and he later also played lead guitar on 2 or 3 tracks of the second Fortunate Sons LP (Karezza) in 1986.
From the 45 Revolutions book:
A Power Pop three-piece formed in 1977 by Mark Ferrick (v/b, who composed the A-side of Dean Wyman’s lone 1978 single, see listing), Jim Ferrick (d) and Ian McKean (gtr), Thirteen never managed to gain press coverage and their lone 7” was released in France, Germany and Holland, but not in the UK. Recorded in summer 1978 with Phil Cordell co-producing, drums on the 7” were played by Mark Ferrick following the death of his brother Jim shortly before the session. Ian McKean resurfaced a few years later with Twenty Flight Rockers and with Balaam & The Angel, a New Wave combo born from the ashes of U.X.B. Note: a different Oxford-based five-piece group also called Thirteen issued a 7” on the Square label in 1980. You can get a copy of the bible here: http://www.hurdygurdy.it/
Hear a full version of Girl Aren’t the Same

Jo-Jo Ellis –The Fly/Perdona Mia –Fury Records FY 302 (1972 UK)
The Fly is a bizarre and haunting excursion from none other than Alvin Stardust (Shane Fenton). The overall mood is set by some neo-Rockabilly vocalisations over an acoustic backdrop with some real out of place orchestration (ARP/Mellotron?). This was probably some form of vanity release (this couldn’t have been aimed at the charts!) on a label run by Billy Fury, who didn’t get round to reinvent himself into a Glitter/Stardust type to refresh his career.
Hear a full version of The Fly