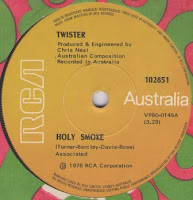 A couple of years back I purchased the second Twister single Getting Nowhere Fast and raved it up here http://purepop1uk.blogspot.com/2010/02/twister-getting-nowhere-fast.html  It has taken me nearly 18 months to finally secure a copy of their first outing and it was certainly worth the wait. As a bonus, I have also conjured up the full story of Twister with the generous help of Mike (Angel) Davis who was also kind enough to send me an endless array of photos and press clippings...Enjoy
Twister –Holy Smoke/Midnite –RCA 102851 (1976 Australia)

Holy Smoke is the great first single by Twister, a glorious concoction of Powerpop, Power Boogie and Glammy Proto Punk. The performance is as tough as nails, full of metallic clanging guitars, cutting cowbell and crunching handclaps. The whole performance is tight as hell and the superb vocals are close to what The Radio Stars were doing around the same time. Although extra trebly, the sound slices through the vinyl as if it was butter. “We thought it was a great and as we recorded it, it sounded great. Trouble is RCA didn't want to spend much so they gave us a totally inexperienced producer/engineer (Chris Neal) who played everything back through the big monitor speakers in the studio as we recorded...Result was a recording that sounded pretty tinny when played back through anything less than 1000 watts..” (MD)
The B side Midnite has that Aussie styled Daddy Cool Eagle Rock/Hi Honey Ho guitar motif. If nothing else these guys had real taste. All 4 sides they released are up there with the best of what Australia had to offer in the 70s. They must have been a blistering live act
Hear a full version of Holy Smoke

Hear a full version of Midnite 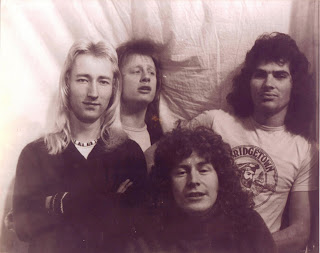 The origins of Twister was a Queensland band called Bedrock featuring Geoff and Steve who were friends with Marty a guitarist from another Queensland band. The band moved to Sydney to secure a bigger audience where they met Mike.


MD: “I met Geoff through a mutual friend during this period when we connived to get Geoff a job working with me in a Quality control chemical lab. Geoff and I quickly became firm friends as I saved his life countless times from the hands of uncontrolled chemical reactions. Through him I was prompted to hone my rather basic guitar skills to become rhythm guitarist for a soon to be formed new band which would follow the break-up of Bedrock...”
This line up was tentative and it would be another few months before Mike fully joined Twister. The band then started to play gigs, often as support act


MD: “We played in all sorts of places. I remember Hurstville Civic Centre, Doyston RSL, Blacktown RSL, various pubs and clubs, all the usual haunts. The place we played most would have been Chequers in the middle of Sydney where we would do 4 hour nights quite regularly or sometimes play with other bands (Dragon, Swanee, Angels, etc). Also we did the Bondi Lifesaver pretty frequently where we often supported Cold Chisel. We made one trip to Melbourne to try and crack a new audience there. I think we supported the Little River Band and a stripper who's name escapes me!”
“On the back of a truck at the Hoyts cinema complex opening in Sydney...” 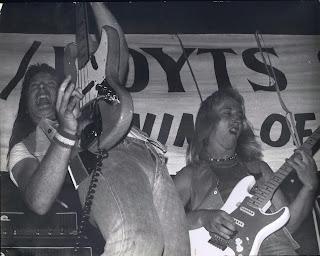 Through their live work, RCA came a knocking...

MD: “We had some guy who was reasonably well known at RCA and would come see us play every now and then. It took a while but I remember signing the contract and thinking this is it...”


“Us signing our recording contract with RCA. Left to right Mike, Steve, Geoff, Manager of RCA, Marty and someone else...” 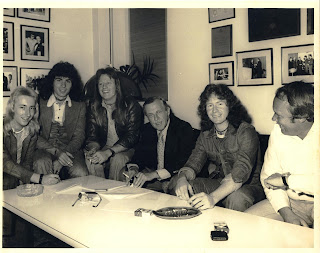 What were the hopes from the deal? How was Chris Neal introduced into the equation?

MD: “Getting a record made was what it was all about in those days We were over the moon to get a contract. RCA's heart wasn't really in the whole new band thing though. They made their money from Elvis and big bands so we were just a bit of a shot in the dark sort of game to them. Anyway, they gave us an untried guy (Chris Neal) who engineered and produced the record at Alberts Studio. It sounded pretty good as we made it but he recorded and mixed it through great big powerful studio speakers and when we got a test pressing home and put it on our record player it sounded like the chipmunks. Quite a few people we met at gigs were keen to get the record but RCA's ineptitude wasn't limited to the recording studio. They couldn't seem to get the record into record shops. So many people couldn't buy the record even though they wanted to...”


How did you see yourselves –Hard Rock, Glam or what?

MD: “Status Quo was certainly a big influence. Tight chunky rock and roll is what we were in to. I know Geoff and I went to see Ted Mulry and Hush three times in one weekend so we must have admired them too. We loved ZZ Top and Queen and were most respecting of Sherbet (though we had no thoughts of being like the Sherbs). Come to think of it we were glued to the TV whenever Abba came on but we didn't seek to copy them either...”


Still reeling from their experience on their first single, they doubled their efforts to ensure that a second single would be the one to break them.

MD: “We made our feelings known about our disappointment with RCA's dealings with the first single. the top guy wasn't that impressed with our cheek but they gave us a second chance, found us a good producer/engineer(Bruce Brown and Russell Dunlop) and sent us to the studio. They also financed us a film clip which was pretty essential in our minds at that time. The film clip was cheap but OK but they gave us too much control over it. We were ahead of our times and did some crazy stuff with the production. We had them put a bouncing ball above the words of the chorus (we didn't think "thinking somewhere, going nowhere was too clear I guess) and worse we put rolling titles at the end with our names...”

WATCH THIS SPACE FOR THE VIDEO-COMING SOON!

MD: “I think RCA were something to do with a tour of Tasmania that we did when the single was out, also they got us some interviews on a couple of TV shows that showed clips at the time. The ten day tour of Tasmania was our real taste of pop stardom. Our clip appeared on a couple of TV shows coinciding with it, we did several gigs during the tour, had interviews on radio and had sex with a lot of nice girls. Unfortunately distribution didn't happen again with this single and more stories of people unable to obtain the records came to light...”

What happened next?
MD: “The flop of the second single was it I'm afraid. Disco was pretty big then so gigs weren't that thick on the ground for Quo style rock bands. I can't remember the day we decided to give up but not long after the second single we drifted away from each other. There was no anger or recriminations, we had tried and failed and we got on with our lives. Geoff joined the Radiators soon after but I don't think the rest of us played in any notable bands...”
“A letter from two schools in Canberra that didn't want us to break up plus pages of signatures...” 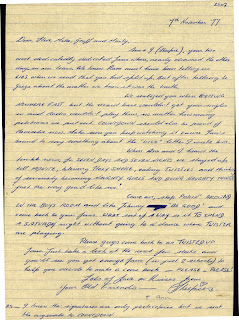 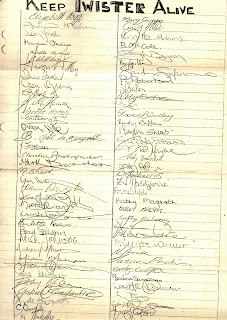 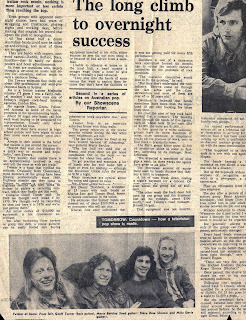 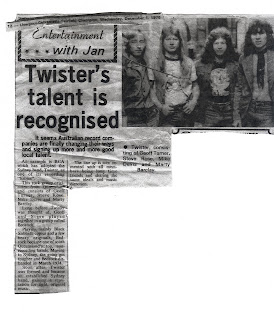 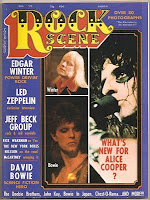 Great work from Ryan Richardson. He has archived old issues of Richard Robinson's Rock Scene online and animated them so you can peruse back issues and immerse yourself in the world of "then". It's got great functionality as you can flick through the pages, zoom in etc...Although nothing will replace having the real thing in your hands, this is as good as it gets. Essential reading!

Click on the title link or go to the links section
Posted by Robin Wills at 11:33 pm 1 comment: 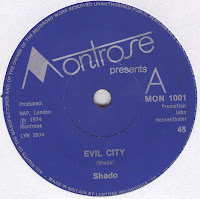 Evil City is perhaps my favourite track on the no longer available Do What Thou Wilt comp http://purepop1uk.blogspot.com/2011/01/do-what-thou-wilt.html. Evil City is a furious fuzzed up rocker with somehow reminds me of Radio Birdman with added pathos, but the B side is more laidback kind of like Ralf McTell walking though a forest. Shado were a complete bunch of unknowns as far as I know..any more information out there?
Hear a full version of Evil City 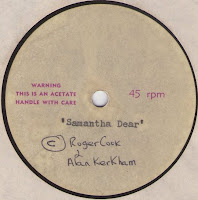 OK, we are not talking about demon-infused dementia as on Cut Loose http://purepop1uk.blogspot.com/2009/02/cut-loose-stud-leather-story.html, but a lighter, gentler form of madness from Stud Leather’s Roger Noel Cook, Alan Kirkham and Dickie Graves.
Never intented for commercial release, Samantha Dear is a fun near-ragtime drinking song, featuring a neat line in spoon dexterity. It could be a Kinks-like satire, but the sincerity is overwhelming -they really mean it man!

From Roger himself, here’s the inside scoop:
Roger: "This was the founder members of Stud Leather recording a song I wrote while drunk in the bath...It was a tribute to skiffle....Dickie Graves played eccentric piano and it set off my vocal a treat (as long as you were drunk while listening to it...and while taking part)....Dickie also played spoons on it and there was a waste basket kicked over at the end...This was at least 18 months before "Cut loose"....and was never intended for release... There are at least 3 or 4 other songs long forgotten that went onto acetates but were never intended for release "Hour after Hour"....."We're Gonna Fly" and others all recorded a cheapo studio run by a bald guy called Curly..." 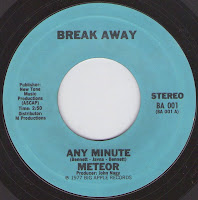 Formed by Tony Bennett’s two sons (Danny and Dae) with Gordon Javna all “surviving” members of Quacky Duck (and his Barnyard Friends...). New Jersey’s Meteor seem to have been a one-off, but a mighty good one at that. If anything I am reminded of Wowii (Hoods) as the powerpop is enveloped in neo Spectorian suburban grandeur. Great tune, great production and a great find

Hear a full version of Any Minute 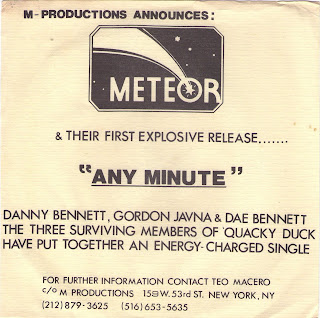 Does anyone remember this band? Gorilla? 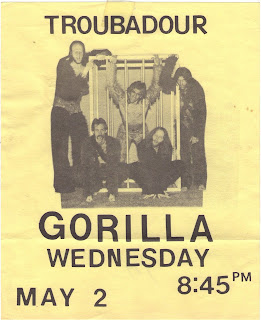 I had this flyer hanging around, but would love to know more, what with my penchant for all things simian...Well they're called Gorilla that's for sure and they look like they would sound great...was anything recorded/released?
HELP!
Posted by Robin Wills at 4:23 pm 4 comments: