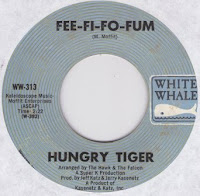 Hungry Tiger- Fee -Fi-Fo-Fum/ Tic Tac Toe –White Whale WW -313 (1969 US)
Hooky, brash and tight as F**k is the most accurate way to describe the driving catchiness which is Fee -Fi-Fo-Fum . The Hungry Tiger single is as much a Bubblegum classic as it is a “Mod Dance floor Filler” (although the poor dears would probably ruin their tight jackets in their over-exuberance)- but just dig the loud drums and tight arrangement with its kick ass horns. One of the many fascinating White Whale releases, but who was the band? Any relation to Professor Morrison’s Lollipop? The B side Tic Tac Toe is not the Magid Triplets tune, but a moody Garage Folk Rock number with its song writing credit appropriated by Kasenetz/Katz as was often custom... 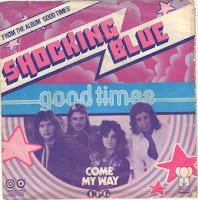 Shocking Blue –Good Times/Come My Way –Pink Elephant PE 22.846 (1974 NL)
Released at the tail end of their career, Shocking Blue’s performance of the Easybeat classic is as incisive and invigorating as it is fitting as a send off. Mariska Veres belts out the tune in expected fine fashion and the lead guitar is suitably Dutch and 70s to be worthy of note. Anyhow just how could you go wrong when twinning NederGlam and Vanda & Young?
Hear a full version of Good Times

Dickens –Don’t Talk About My Music 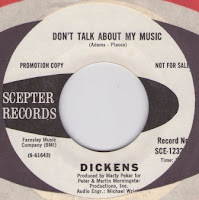 Dickens –Sho’ Need Love/ Don’t Talk About My Music –Scepter Records SCE 123 22 (1971 US)
OK, the time has come to unleash this one. Dickens was a concept by NRBQ’s road crew based on the premise “that an E chord played loud enough on an electric guitar was enough to satisfy a certain segment of the populace...". The Dickens would turn the amps up to 10 and swap to instruments they were unaccustomed to. Whatever the premise; Don’t Talk About My Music is an insane piece of shambolic in your face Bonehead ROCK and is to be heard to be believed. The A side on the other hand is all about mood and atmosphere and reaches haunting heights of psych Pop glory. Read the full story here: http://www.spectropop.com/Dickens/

Hear a full version of Don’t Talk About My Music

Air Traffic Control –Gotta Get A Message Back To You 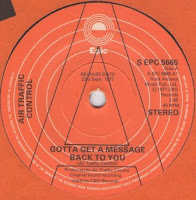 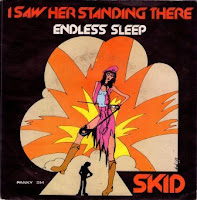 Produced and probably created by Tommy Scott (co-writer of I Can Only Give You Everything, producer of Terry (Twinkle) and discover of Lena Zavaroni!), Skid was his attempt at going PUNK whilst probably relying on his 60s leftover connections as performers.
It would be interesting to identify who is on the sleeve of the German issue –any clues? Who is the screeching vocalist? 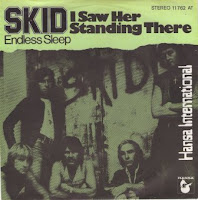 Of the two tracks I much prefer Endless Sleep with its marked 74 Glam beat, but I Saw Her Standing There is a more obvious choice for this “if you can’t beat ‘em - join them “exercise as covering this Beatles tune was bound to teach the young whippersnappers that Punk was not invented in year 0. The Belgian sleeve is the winner and a classic Faux Punk cover for the masses (well Belgium anyway)

Hear a full version of I Saw Her Standing There 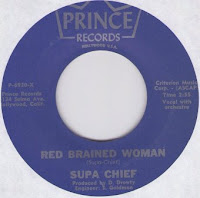 The term Heavy Bonehead was coined for this one! It’s loud, sleazy and dumb, but oh so good. Supa Chief was an Orange County band with Bob DeMalignon on Vocals, the Shattuck brothers (Dan and James) on guitar and drums respectively) along with Mike Carousal (guitar) and Dennis Koker on bass. The lead guitar is masterful and the thudding drums are further nailed to the beat by a gleaming cowbell. The B side Animal Woman sounds exactly as you expect it to –Neanderthal and sublime. Coincidence... or could The Muffs’ Kim Shattuck be a younger sister to the Shattuck Bros?