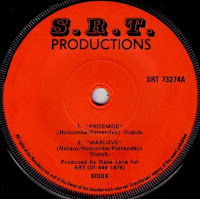 Sioux –Prosmoe/Warlove/You’re All I Need/Happiness In The Sky –SRT 73274 (1973UK)
Welcome to amateur hour...Issued on SRT which released countless “private” affairs throughout the 70s, here is a 4 track EP by Sioux. It must have been recorded as a demo and they probably touted it around to get gigs or perhaps a record contract...The overall effect is a bit like a prog era Swell Maps . Prosmoe could have been a 60s garage band attempt to re-write Gloria, whilst Warlove sports some Wah Wah guitar and sounds more in tune with the 70s. Still the four tracks find a band stuck somewhere between a Hard Rock place and ineptitude. Side 2 is pretty much more of the same...Again, any info on the band itself?
Hear the two songs from side 1
Hear both songs on side 2

Very nice. Your blog makes me wish I lived in the UK and had a chance of just stumbling upon records like these.

a stumble which involves 42 miles up and down the M1...

Oh though I couldn't possible respect anyone who begs, it's time to get off your knees and stop snivelling as here is side 2...

I'm up on my feets again...
Thank you very much Mr Purepop!
I'll have those songs on repeat for the rest of the day.

Hi
Tommorrow evening the EP is coming up for sale, send me an email and I will include you on the email list