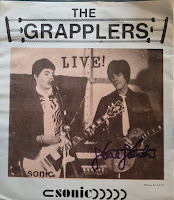 A while back I posted a review of the Starlust single that I had been after for years , now I can add an important appendix to the tale http://purepop1uk.blogspot.com/2019/02/starlust-girly-books-magazines-obscure.html

Starlust were formed in 1974 and we part of the burgeoning New York scene that brought us the New York Dolls , Harlots of 42nd Street, Teenage Lust and The Ramones. Starlust were then replaced by  the Steve Starlust Band in 1977.  By 1980 it was the turn of The Grapplers comprised of Steve Starlust and original Starlust bassist Paul Lowrey. They were joined by Brian Unger (from New Wave/Synth Pop band Enterprise) on guitar and Ed “Shark” Bettinelli on drums. There was a tie in with wrestling events and The Grapplers even appeared on the Showtime cable service. 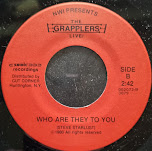 Both tracks on the single were recorded live directly to a Tascam set up, beefed up by a wrestling type announcement and added crowd noise. Both tracks are real scorchers, luckily eschewing any dodgy 1980 production trappings, but instead feature a fine raucous and raunchy sound.

It captures a performance reminding of the Proto Punk of Streak with some Wowii moves thrown in. Perhaps Who Are They To You is my favourite here, which has a nice turn in New York Lou Reed/Velvets sleaze…

The single is a great package in itself. Housed in an oversized sleeve it also came with a lyric sheet insert, a GREAT GREAT find

Hear full versions of the A and B sides