Antilope – Down On Your Feet 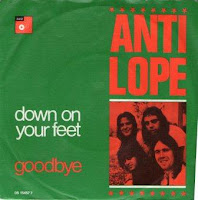 Antilope – Down On Your Feet/Goodbye –BASF 05154577 (1974 NL)
Purepop welcomes you back into the world of NederGlam with this outing by The Hague’s Antilope who were formed by EX-Shocking Blue bassist Klaasje van der Wal after he was supposedly kicked out from the aforementioned band for his ”excessive lifestyle”. The other members were singer Steve Allet, guitarist Dick Jongman and drummer Gerard Korff. Down On Your Feet is a bright and snappy stomper with vocals recalling at times Alex Harvey or Bon Scott over a Brother Susan like backing. Although not the most raucous Glammy Dutch outing, it’s still a fine catchy specimen of the genre. The B side is in a similar vein and is certainly worth a spin or two. Antilope released at least two other singles on BASF which I haven’t yet heard: Come On Suzy( 1973) and Get Ready (1975).
Hear a full version of Down On Your Feet
Posted by Robin Wills at 1:22 am

great, lookforward to the posting...What is happening with your site...run out of records?

Guitarist Dick Jongman also played with Booby Trap, also on " Kelly, Grace & Sally" ! Only I don't know whether that was before or after Antilope. Both records are from 1974.
jos

An interesting note about "Come On Suzy". The killer chorus in this track was lifted from The Move's classic cut, "Hello Susie". It's strange that Roy Wood was not credited on the single.

So true about Come on Suzy...