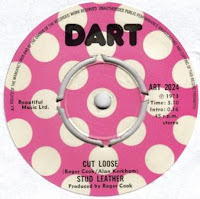 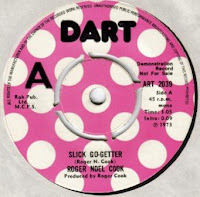 Cut Loose: The Stud Leather story
Cut Loose is undeniably one of the most amazing timeless punked-out singles ever released. The fact that I have up to now posted two reviews on this amazing single, at least shows how much I care about this particular monster, but I know that I am not alone in my obsession and many of you share my enthusiasm for this fab slab of plastic.
Recently Roger Cook (who sang and co-wrote the track) got in touch and now for the first time here is the story behind this Killermost of all killer singles .
The band was formed in 1972 when Roger Cook met Alan Kirkham at IPC Magazines in London. Roger was a writer and Alan was an Art Editor.The band’s formation had a slightly different aim from what Cut Loose could lend us to believe:

Roger: Basically I'd always fancied myself as a songwriter and Kirkham and I started out writing stuff more like “Yes…during their Fragile period", which was a long distance from the way we eventually ended up sounding. We would write 7 minute singles but I thought that these were never going to get played…
The line up was Roger Cook on lead vocals, Alan Kirkham on guitar, Hayden Gridley bass, Johnny Aldrich on drums and Dickie Graves on backing vocals. Dickie seems to have been quite a character:
Roger: Dickie was a talented and eccentric individual who I recruited while he was dancing on a table in a HABITAT!!! We used to drive my Trans Am down his street in St Mary's Cray with him sitting on the bonnet dressed up as a robot. We both needed attention-from an audience-and probably medically as well…
Q: What were you trying to do with Cut Loose?
Roger: I just wanted to do something which was the total opposite of cerebral. I was (and still am) one of the most optimistic people I know. I just wanted to rant, explode with enthusiasm and throw in some Dr. Hook for good measure because I had just seen them in concert and was smitten.
Q: How did the track come about?
Roger: Let's just do a 12 bar in E!" said I and I wrote it in my bathroom. Kirkham figured out the guitar. Graves chipped in with parts of the chorus. The drumming (which actually makes the track work) all came from Johnny who had had some fame with a group called the Wranglers (Got onto Top of the Pops but nothing came of 'em) He also worked at IPC as an artist.
To my ears, Cut Loose not only sounds deranged, but also sounds more than just a tad drug fuelled…

Roger: It was just pure enthusiasm....we didn't think about anything.....The explosion at the end is a hand grenade sound effect supplied by De Lane Lea where the track was recorded in Soho."
Hear Cut Loose here:

Q: How did you end up getting signed?
Roger: I got some encouragement from Micky Most at RAK but he thought we were just loud and proud. Eventually someone recommended Clive Stanhope at DART. He loved Cut Loose straight out of the box and put it out. Tony Blackburn played it, Fluff Freeman supported it.
We were never told where Cut Loose was released. I had no idea it was released in Germany or Japan for example. We learned many years after the event that it had been a success in France with the dance crowd. We never received a penny in any royalties...
Q: What happened after Cut Loose?
Roger: The band broke up immediately after Cut Loose and I released a DART single under my own name Roger Noel Cook called Slick Go-Getter. Slick Go-Getter was really something I wrote to sum up what an ego-tistic fellow I had become...Jonathan King liked Slick Go-Getter and I now know why...it was gay!
Hear Slick Go-Getter here:

I’ll let Roger fill everyone in with what happened next, it is quite the tale…
Roger: The reason the band was doomed from the outset was I had already become financially very successful by age of 21. I already had an E-type (which I mentioned in Slick Go-Getter). I was a successful writer (Tom & Jerry and Dr.Who if you can believe it) I'd sold a pop poster concept to IPC. I had a leather clothing company called FORESKIN LTD and Warner Bros asked me to be the youngest ever CEO of their Publishing Division when I was 24. Basically I was doing better than any of the guys topping the charts and I could see much more moola coming my way. It was music or money. I chose the latter but my music days were to return. Here's how:
I became one of the Producers ( along with Paul Raymond and Adam Cole) of the massively successful ELECTRIC BLUE soft porn series which is in fact the best selling video series of all time. One of my inputs as Producer was I had to write and record all of the dozens of rock songs which appeared on the ELECTRIC BLUE soundtracks. To date there are 200,000,000 ELECTRIC BLUE tapes and CDs in global circulation so effectively I have sold more units of my music than the other (more famous) Roger Cook and (I'm told) more than Michael Jackson by quite a margin.
I formed a recording band called BROADSWORD to cut ELECTRIC BLUE-THE MUSIC...and another band called CROSSFIRE to cut OUT OF THE BLUE...the rock tracks from those compilations are still played on the PLAYBOY channel in the States and have been for the last 28 years...amazing really...Finally ELECTRIC BLUE-THE MOVIE was released in cinemas around 1980-ish and was a big success in the West End and I performed a number in the movie called BROOKLYN BARS...I Can't find a copy of the movie...It was released alongside our regular monthly ELECTRIC BLUE releases on video but I haven't spotted a copy any where...Pornsters tend to keep their stuff!
Er...that's it...born poor....got punked...got porned...ended up rich...Doncha love Life?
Here’s a recent photo of Roger Cook in his Villa in Spain. 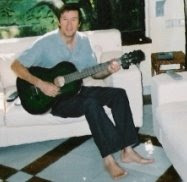 Thanks Robin.
After some looking I recently scored a very nice copy in sleeve for ahem ONE EURO. Agreed that it is one of the best rock & roll singles ever made.

Hi Scott
Is it the German copy by any chance? If so I could really use a scan. It should have a car on the cover

Oh my god. I cannot even believe this dude. Cut Loose Has become one of my favorite songs of all time. This man is my idol. What an epic story.

My husband Alan Kirkham was in Stud Leather he co wrote arranged and played lead guitar on Cut Loose and Emma Louise named after our daughter he also arranged and played lead guitar on Slick Go Getter.
He says it was an amazing time.
We have only just found out that the records were on line and have enjoyed listening to them again.
Alan is currently playing in a band called The Elderly Brothers.
Thanks Robin for a great site.
P.K.

Hi PK
I met up with Roger last year. I am sure he would like to get in touch with Alan. Send me an email purepop1uk AT yahoo.co.uk and I will send you his contact details
Best
Robin