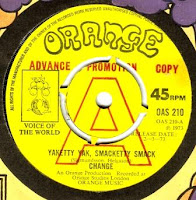 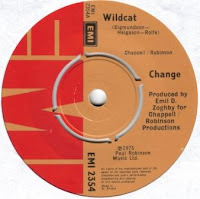 This review definitely asks more questions than it answers…These two records seem to feature the same band, but they don’t sound at all alike. Wildcat is firmly in Brother Susan/ Slade Glam mode while Yaketty Yak, Smacketty Smack is a lovely pop tune to suit an afternoon of mild S&M activities. Both singles have Sigmund(s)son and Helgason credited as writers (Wildcat adds Rolfe –Could that be Barry Rolfe who recorded Look The Business?), so I would assume a Scandinavian connection. The EMI single is produced by Emil D. Zoghby and to confuse matters even further, I picked up a single by Chance (although credited to Change on the back cover) called Wash My Mem’ries (Pink Elephant PE 22.736 –H) also produced by Emil. That single is rather ghastly, but again could this be the same band? Hopefully our Nordic friends can perhaps provide some information here?

Click below for edits of Wildcat and Yaketty Yak, Smacketty Smack
Posted by Robin Wills at 10:03 pm

First bit of info -they were an Icelandic band...discography and more detailed info welcome!

"wildcat" starts off pretty promising but then doesn't really go anywhere. "Yaketty Yak..", on the other hand, (and thanks for having previously copied me the whole thing)is gorgeous. It has the same vibe as "White Lies, Blue Eyes" by Bullet, "Chevy Van" by Sammy Johns etc etc: it's like America with songs written by Cook/Greenaway. Excellent.

Deffo that Barry Rolfe bloke. That Zoghby guy was hooked up with Jack Good's "Catch My Soul" project, apparently, so I suppose that puts him in the UK, but that's about all I know...

Who's got the gen?

I think that Zoghby was South African or Rhodesian I guess if you mix Iceland Ice and African fire, you get lukewarm water or something like that...This from David at the 784533.co.uk site:
"They issued an eponymous LP on their own label in 1974, which Poppbókin (a bible of Icelandic rock music) describes as "sugarsweet pop"! The line-up was Sigurður Karlsson, drums, Birgir Hrafnsson, guitar, Tómas Tómasson, bass, and Magnús Thor Sigmundsson and Jóhann Helgason, vocals.