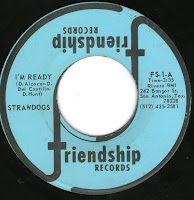 Strawdogs or Straw Dogs were a local San Antonio (TX) band who are on record as being the last band appearing at the Teen Canteen  in 1977. Not much else is obvious to find, but as is often the case, these posts sometimes help to uncover the facts...

Both sides are sturdy examples of 70s US Hard Rock, caught between the garage and the bar room with a guitarist who had a fine line in greasy chops and sinuous lead breaks.As with the label which works both ways, both tracks are good so you can come at it from any angle…pass the salsa please

The guitarist on this 45 is David Alcocer who is best known for his membership of Heyoka, a Texan band who released (at least) three 45s in the late '70s, but who formed around 1970. They supported the likes of Van Halen, Mahogany Rush, Budgie, Rush, Ted Nugent, Be Bop Deluxe, Judas Priest, Golden Earring etc & finally had an archival anthology album, 'Spirit Of Revelation', released by ShroomAngel Records in 2012.
Alcocer also played in Junior Jesse & The Teardrops, Zapata & Sangria Black and i'm sure he plays with Bubba Hernandez y Los Super Vatos sometimes too.
Hope this info is of interest.
You can find David on fb, and i'm sure he'd be happy to clue you in should you want to know more Strawdogs.
Eduardo

Thanks Eduardo, We use to hire them down in Kerrville and tried to catch them at every opportunity. David was an incredible guitarist doing stuff that very few of us never could and that was years ago!!! A really nice guy and an inspiration to this day. Good to know he's still out there playing. I plan on catching up with him and hope to play some music with him!! Thanks again....Rob Bartell

Whatever happened to Dickie (Del) Castillo...I thought he played lead for Strawdogs?...maybe it was bass??...ran into Strawdogs at rockbars back several times in the early 70s...