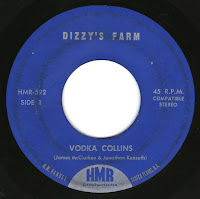 Another complete mystery disc here. Vodka Collins is a pretty good 70s rocker, with some gritty guitar featuring leslie speaker-like sound  during the cool guitar interplay; great  playing anyhow…Chattanooga Blues is an uptempo cowbell driven rural choogler; about the merits of moving to the country, upright yet bouncy...
Apart from the 1972 release date and that it was recorded and produced by Harry.M Randel- the head honcho at HMR (https://www.discogs.com/artist/3139387-Harry-M-Randel) out of Scotch Plains (NJ), nothing else was found after initial googling –More info and an upgrade would be most welcome!

Jim McClurken was in a popular late '60s/early '70s band based in New Providence, New Jersey USA called The Decoys. The Decoys opened for The Who 50 years ago today at at show at Union Catholic High School in Scotch Plains, NJ. The story of that show is chronicled in a book titled "When Stars Were In Reach" by Michael Rosenbloom. Rosenbloom maintains a Facebook page, and on November 5 2017, he posted a photo of the Decoys' original setlist for the Who show. Look at the picture closely, however, and you'll see the sheet behind the setlist is a typed lyric sheet for McClurken's song Vodka Collins! Facebook page here: https://www.facebook.com/whenstarswereinreach/posts

It was August, 1967. I was a 13 year old, and I saw The Decoys play at the teen dance held at the long defunct Clover Hill Swim Club in Millington, NJ, just a 15 minute drive out Springfield Avenue from New Providence.
This was my first live show.
The band was tight, polished and sounded as good as anyone I had in my 45 collection.
Great harmonies, and really good instrument playing.
Thanks for the memory.