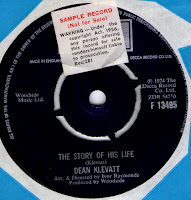 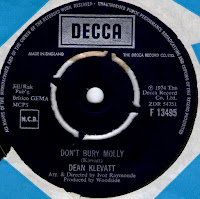 If it wasn’t for that Titan of a man Mark Prellberg, I would never come across this perfect specimen of Glam era pop.
Dean later became Kim Fowley protégé Bobby Sky and nearly had the wonderful Beach Boys/Powerpop concoction The Water released on Titan at the time (it does however feature on Numero’s Titan comp It’s All Pop with 2 others (more US info here http://www.numerogroup.com/artists/bobby-sky).

Both songs are wonderfully evocative of the time. Supremely melodic performances that still sound really fresh, it is literally a preserved time capsule that sends you back to early 70s Bowie or Elton John with a sparkling pop effervescence that is timeless. At times you may think if a teen version of Pilot, but it’s much more imaginative and lively than any of those comparisons. There are however closer similarities with Brett Smiley but without the Clout of Andrew Loog Oldham or a Russell Harty TV appearance.

Anyhow back to the UK and 1974 with the 3 day-week and industrial strife. Dean had a dream you see, the lure of Anglophile Pop and the chance to write the story of his life among his heroes. Dean was 16 at the time…

DK:  “I grew up listening and being influenced as a musician by so many UK artists such as The Beatles and David Bowie that as soon as I could I wanted to go and experience for myself where that all that incredible music came from…! This certainly wasn’t Kansas anymore
DK: “I came to London from Kansas with very little money and only a 2 month visitor’s visa. I recorded a piano and voice demo at a little studio somewhere in London and took it round to all the publishers I could get an appointment with. I was politely turned down by everyone, and literally the last appointment I had was with Ivor Raymonde who had his offices on Denmark Street. He really liked my tape and asked me to return the next day. I was totally broke so he gave me £5 to insure I could make it!"

Can you give some background on the single -who played on the session?

DK: “Ivor arranged the session at Decca Studios in West Hampstead--a very famous place in pop music history--as he had gotten me a singles deal with Decca Records. It was in Studio 2 which had a Neve console, I thought it sounded amazing in there. We cut 5 songs, not knowing which would turn out to be the single. I can remember the session very clearly. The guys sat around that morning waiting for Ivor to turn up with their sheet music, kind of bored and matter of fact, like another day at the office. It features Clem Cattini on drums, but I didn't realise how much of a well-known a session player he was. Once they got playing however my songs sounded amazing from the first take. Ivor had insisted that the piano was played by a session guy which devastated me at the time as I felt my piano playing was integral to the feel of my songs. But Ivor wasn't about to take a chance on an untested 16 year old being able to play a session with these top guys whose ability he could count on. Nevertheless I was really upset about that..."

The single reached demo stage and regular copies were also pressed up, but probably only with sample stickers. It is unclear if any singles actually reached the shops. The Demo has Don't Bury Molly as the A side, whereas the regular issue appears to have switched sides

DK: "It got a few plays on Radio 1 in their new releases slot on a Friday evening and also some local radio play but not much after that. There was a 3 day working week in Britain at that time which meant that there was no vinyl in the shops so it was unavailable anyway!" 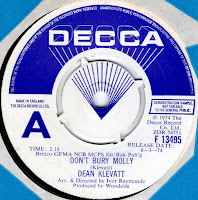 What was your return to the US like? How did you hook up with Kim Fowley?

DK: “I went back to the States as my visa had run out and Ivor was so busy with his other projects that even though he was quite happy to record another single for Decca, I just couldn't hang around waiting for that to happen. So I told him I thought it was best I return home and we parted as friends. By the way I'm so grateful to him for his enthusiasm to produce me and the chance to make a record in England! I moved to LA where I had family I could stay with and met Kim through a contact who gave me his pager number. He phoned me back and we had one of the most amazing conversations I've ever had in my life. It must have lasted 2 hours or more and I got the full Kim Fowley manifesto. We met up in a studio he booked in Hollywood where I played him my new songs which he really liked. He gave me a handful of title and lyric ideas which I thought were genius and told me to go away and write tunes to them. I did and he was overjoyed with the results. This led to an introduction to a publisher he knew at Chappell Music on Sunset Boulevard who signed me immediately. Bobby Sky was Kim's idea. He was always renaming his charges. One day he turned to me and said "From now on you're Bobby Sky."

Many thanks to Dean and Mark Prellberg

Hear a full version of The Story of His Life

On my first play on YouTube 'Don't Burn Molly' didn't do much but it has really grown on me and I like the B side as well.

I can hear a hint of Pilot in 'Don't Burn Molly' but it is individual enough not to be a sum of influences etc.

Interesting how Ivor Raymonde gave Dean a chance when no one else would! In those days if you met the right (i.e. connected) person and they liked your song(s) they could get a single at the very least out of major label?