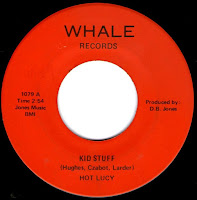 Randy Meyers has featured on Purepop before as one of the forces behind the great Dwarf singles. He was older than the Dwarf teens and served as an experienced hand to guide them and serve as engineer. Randy was quite the local hero having served with The Pagens who released the sought Garage Punker Mystic Cloud, but the story didn’t end there as he then formed Julia who backed Bob Seger (post System –pre Silver Bullet Band) as well as releasing 2 singles in their own right as Julia on Palladium. The break-up of Julia let straight to the formation of Hot Lucy who only released this great two-sider during their existence. Kid Stuff is a perfect Proto Punk rocker, exhuming sass as well as savoir-faire, although the sax break provides a Marmite effect (for the puzzled non UK residents –substitute Marmite with polarizing) and takes a bit of getting used to. Switchitter is a more unified effort reminding of Dwarf in the verses with more melodic twists and turns, catchy as hell providing a typical US Powerpop dimension. Short and succinct both tracks are winners and amplifies the shame that the band didn’t release anything else during their existence

Hear a full version of Switchitter

I had the opportunity to catch up with RandyMeyers. Randy is still busy touring with The Drysdales and playing with other acts so is far from hanging up his sticks.

Hot Lucy was really the continuation of Julia which was comprised of 3 members of The Pagens augmented by the arrival of Calvin Hughes (who went to form Hot Lucy with Randy). Julia marked themselves outside of the whole heavy Michigan scene “We got to be really popular in Detroit. We were the anti -group. When everyone was into the MC5 or Stooges, we were the Pop guys; we were doing The Beatles and Badfinger…”

Julia was managed by Punch Andrews (Bob Seger, Kid Rock) they opened for many visiting acts and ended up backing and recording with Bob Seger.  Bill Mueller was asked to join Bob Seger without the other band members and that led to the eventual split of the band. Hot Lucy started in 1973 when Julia broke up and was in existence until the summer of 1977. “Hot Lucy had a lot of people go through it; it was almost a revolving door...” Derek St. Holmes (Ted Nugent) was probably the best known member.

If Julia were the pop guys, who were Hot Lucy?
“We went for a harder edge with Hot Lucy. The bass player was more into R&B and Blues, so we got into that…We just want to create our own sound...” They opened for many acts including Kiss, Bob Seger, The New York Dolls and The Raspberries. They also built their own studio and did a lot of recording, although the Kid Stuff single was the only release at the time.
“We recorded the single at the end of 75/early 76 and released it ourselves. We got very little airplay but sold it through the little fan club we had and at our gigs…” 500 copies of the single were pressed.

There is a powerpop edge to the single and recalls a more grown up Dwarf “I produced the 3 Dwarf singles and their EP. It kind of morphed as both groups had a similar sound…”Although influenced by bands like Free, they retained a pop sound. “We wanted some pop sensibility where it wasn’t so far out that people couldn’t hear the commerciality about it. Calvin and I came from a pop background with Badfinger, Beatles, Raspberries and The British Invasion stuff which was how we cut our teeth in the mid 60s …”

The line-up on the single was Calvin Hughes (guitar/vocals), Gary Czabot (bass), Michael Harner (guitar) and Randy Meyers on drums. They also brought in a sax player on the A side from a 50s band called Moose and Da Sharks. Hopefully now is the time for further material from Hot Lucy to finally seethe light of day. Thanks to Randy! 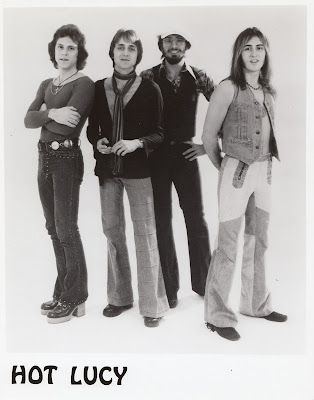