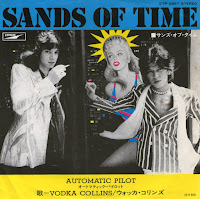 A wondrous and killer single released in 1972 by Alan Merrill whilst in Japan following the initial line up of Streak  and forming hit-makers Arrows in the UK. Automatic Pilot could have been huge beyond Japan, if only their management and label had seen the wisdom of recording the song in English and looking beyond the Nippon market, but it was not to be. Alan’s Japanese sojourn did bring local success and they also recorded an album Tokyo New York. Automatic Pilot is the perfect Glitter choogler with a chorus that is pure T.Rex bliss in its hooky melodicism.

Alan was kind enough to fill in the gaps and tell the tale...

Streak was formed by Alan with Jake Hooker and John Siomos (drums) “We started Streak in New York while I was on holiday from Japan waiting for a work visa to go back there. It usually took 3 weeks to a month. We recorded a demo tape that reached Tony Hall" (Black Sabbath/Arrival manager), John soon left the band and Streak reconvened in London recruiting David Wesley on drums. However things weren’t moving fast enough for Alan. “At this point my money was running low and with no retainer in sight I got cold feet and took a flight back to Japan where I knew I'd have solid work and a record deal…”
Alan had co-written (although un-credited) "Gonna Have A Good Time and Be Your Ryder which was the first Streak singe on A&M featuring Alan’s replacement Ben Brierly on bass Meanwhile back in Japan… "While Jake was struggling to make Streak a hit band in the UK I had managed to make the first ever Japanese language glam rock records, singing in Japanese with Vodka Collins. I wrote the songs in English in 1971 and my drummer Hirsohi Oguchi made Japanese lyrics for the songs. "Automatic Pilot" & "Sands Of Time" in 1972. It was a double a-sided hit single. I think at that point in time I had made the right decision to return to Japan rather than stay in England with Streak..."
Was Automatic Pilot ever recorded in English at the time?
"No, that was one of the major sore points. I wrote the song in English but EMI Japan would only release the Japanese language version. That confirmed my fear that they had no interest in promoting the product outside of Japan. It was so frustrating. Compound that with only a very small trickle of money coming my way from Vodka Collins' management, so I had to say 'Sayonara" and jet it to London to start the Arrows. I took a big chance. When I got to England in 1974 I was broke, slept on Jake Hooker's floor until we got the record deal with RAK a few months after I arrived in London. It all worked out somehow. We were soon in the charts and touring as Arrows. I see in Vodka Collins you were a duo then were joined by a guy from The Spiders plus another..."
Was Automatic Pilot recorded as a duo?
Vodka Collins started as a duo, much like T Rex in the UK. We rehearsed my original songs just bass and drums for a few weeks. When the time was right we brought in a bass player (who was actually a fine guitarist, top musician) to complete the live line up. "Automatic Pilot" was recorded as a trio with Hiroshi Oguchi on drums and Take Yokouchi on bass. I played all the guitars (Gibson Les Paul) and sang the lead vocal (and the high falsetto octave vocal, overdubbed) in Japanese. Monsieur Kamyatsu of the Spiders joined us for live gigs, his being such huge star in Japan it was a great plus having him aboard. 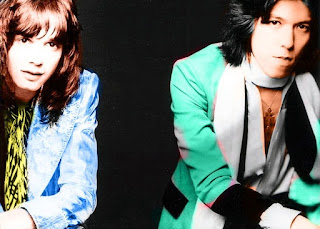 You know, odd as it seems to this day I am still considered a domestic Japanese act, and not a foreign act in Japan. In that sense I'm unique and an anomaly. The only foreigner who will always be considered a home grown local act…
Posted by Robin Wills at 12:44 am

This is The Toys from Japan a popular band who covered Automatic Pilot.
Video clip;
https://www.youtube.com/watch?v=WDPQXEJA4KQ

Always good to hear the history behind one of my favourite songs :)

See my exclusive in depth interview with Alan Merrill including prev unpublished truth behind how I Love Rock n Roll was written in Dec 2016 issue of UK rock mag Vive Le Rock(its the one with The Cure on the cover).