Due to work commitments, I had to cancel my usual flight from London to Amsterdam and took an overnight coach from Paris to Utrecht 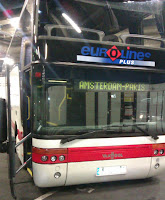 Because of fog and the huge queue of passengers wanting to get on the bus, the 6am arrival in Utrecht ended up in fact being 6:50. But by 7am I had checked into my hotel and got to the fair for 7:15am. Anyhow, I had good first day at the fair. I had been meaning to limit the number of spares I pick up as I just don’t have the time and aptitude to list them all on ebay or arrange swaps, but I made some choice finds anyhow 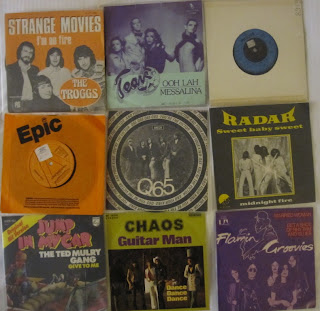 
Tag –Off Down The Road. A killer single reviewed here about 5 years ago.


Diodes –Tired of Waiting Tired (an anthem for today…)


Q65 –You’re The Victor –Dutch Freakbeat at its best 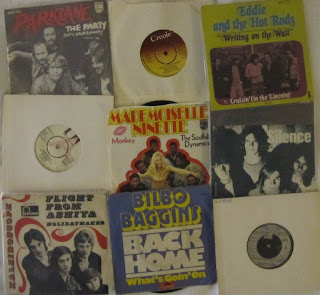 
Eddie & The Hot Rods –Writing On The Wall. My favourite Hot Rods track in its French pic sleeve.


Peacock –Rose Marie –No idea but with Jonathan King involvement


Tristram Shandy –Saccharine, Sandie, Fingers N’ Thumbs/Mr Blue (I don’t think I have the A side…) 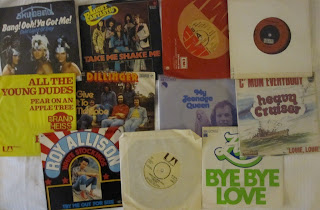 
Skyband –Bang Ooh Ya Got Me. In its glorious plumage adorned German sleeve!


Light Fantastic –Take Me Shake Me –See pic sleeve –what can I say?


Pumkinhead –Holy Moses. No idea on this one. It’s from 1974 and written by Martin/coulter, so it can’t be all bad…


Dillenger –Give It To Me Babe –overlooked UK Pop/Glam


Heavy Cruiser –Louie Louie. On of the highlight of Bonehead Crunchers. The French single version contains the full ending which is edited out on the US version.


Limelight –I Should Have Known Better/ Tell Me Why. Two Beatle covers recorded at Rockfield in 1972. Any relation to The Knees?

Now sleep and then tomorrow…Once more into the breach!

Well done on the Eddie & The Hot Rods and the Heavy Crusier 7"s!!