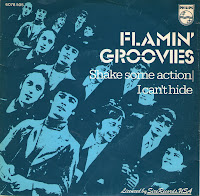 It’s not often worth buying a record for its cover alone, but this is an occasion where the sleeve truly justifies the means. It is especially worth it when you consider that this is the Capitol 1973 version with Ron Greco on drums and not the 1972 Rockfield version that can be found on the SSA LP. It’s a mystery as to how this version was used Holland in 1976, was it intended or not? Someone, somewhere should know…

Hear a full version of Shake Some Action

One of the Greatest Songs of all times.
I believe the guitar intro is one of the best I ever listen.What do you think ?

Just to confuse you further, or maybe not . The UK 1976 Sire single , there's two versions, different mixes/ recordings . One the usual LP version and presumably the others the Capitol Version, well it's slower

The capital Records version done in 1973 has Terry Rae on the drums. He also did " Since I heard your name." during that same session.

Thanks for the correction. I meant Terry Rae (Hollywood Stars)

Oh Terry...You haven't got tapes of the unreleased Holloywood Stars recordings by any change? Please contact me via email. purepop1uk@yahoo.co.uk

Yes, Ruben & mike just got back the masters of the Niel Merriweather demo tapes....very cool. The oldest tapes are from the Record Plant..for Columbia..those were never finished completely . Escape and King of the night time world are off those old sessions. I noticed people are posting them on U-tube. Probably Kim Fowley....i like to hear "Shine Like A Radio" again myself.

wow...that Kim Fowley piece in Bomp really got me fascinated at the time. I would love to hear the songs. BTW, when I was in LA last year I bought a poster of The Stars at the Whiskey a Go Go. It had a picture of the Runaways (as a 3 piece) on it as well. I think it was your farewell show. Did you ever get any acetates done of that stuff?

Robin, thanks.for your interest. The Bomp article was classic... As far as the Stars go, we had mainly tapes, the Merriweather tape that got us the Arista deal and the original Hollywood Stars lineup doing songs that were never even finished or mixed..those songs were writen by Mark Anthony,Kim Fowley,Mars Bonfire, Ruben Defuentes,Scott Phares and myself so its a cool combination of thought and direction. I assume Columbia still owns the rights to those songs. the Merriweather tapes would be somthing though...he really captured the double drum thing Bobby and I were doing better than anyone.

Hi Terry
BTW, do you know I am currently still playing with Chris (Wilson). We just did some dates in Japan and Italy. I'll say hi to him

No I didnt..thats so cool. Glad he's still out there rockin'...hey , give him my best when you see him.

Sometimes I wish I never left those guys..they were all great people.