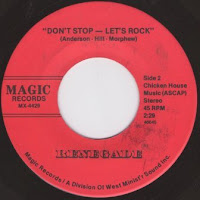 Renegade –Rescue Me/Don’t Stop - Let’s Rock –Magic MX 44 4429 (1974 US)
Although Collin should be able to fill in the gaps more accurately, Renegade was are hard rocking outfit from Iowa who released this  full frontal snotty wallop on the Magic label which peddled the wares of West Minist'r until the mid 70s. Recorded at Wesminst’r Sound and probably produced by Kirk Kaufman who also released the  soon to be reviewed Captain Kirk single Space Baby with its fine rockin’ B side Small Town Cop on the Cognito label (which also released the more Mott than Mott Too Easy To Love/ She’s  A bore single by  Dahcotah in 1976)
Not sure what became of Renegade, but the Killer Kiss-like Don’t Stop- Let’s Rock is a rampant ear-wax removing blaster.

'West Minist'r were a late 60s garage group originally from Fort Dodge, Iowa, remembered today mainly by garage collectors for their great 'Bright Lights, Windy City' single, though they continued to play, record, release records and enjoy a fairly high level of regional Midwestern popularity well into the mid-70s (their last single, 'My Life,' is great heavy rock).  Sometime in the early 70s, the band's principle songwriter, Kirk Kaufman, converted an old chicken house on his family's farm into a crude recording studio, Chicken House Music, to serve as a personal practice space for West Minist'r as well as a one-stop recording and publishing imprint for other local bands.  Kaufman and Co. then launched three small labels:  Raspberries, Magic and Cognito; the last imprint being of particular interest to readers of this blog for containing both the Captain Kirk and Dahcotah singles within its slim discography.  Who Renegade were and when and how and WHY they recorded this steaming shot of ethanol corn-punk is a mystery.  And although the Magic label catalogue numbers seemingly 'date' this single as preceding the final recordings issued by West Minist'r (approximately 1974), it would be very hard to believe that this record hailed from any earlier than late '75/early '76.  A remarkable record (don't cheat the world out of the April Wine-style A-side, Robin!) and one I probably should have never traded to the silver-tongued bozo behind this blog!!!'
Hear a full version of Don’t Stop - Let’s Rock
Posted by Robin Wills at 4:07 pm

Oh boy, your mention of "Too Easy To Love" by Dahcotah sure brings back memories: you don't happen to have that available, do you? Thanks for all of these obscurities!

Hi
Dahcotah will be up soon!

I was the guitarist in this band. We recorded this in Dec. 1981, when I was 17 and a senior in HS. Alan Morphew sings lead and plays bass; Bob Cevera plays the awesome keyboard solo at the end, and sings backup; Jeff Reints plays drums; I (Mark Hill) play the guitar and sang backup. The band Renegade was active from 1981-1983, and was based out of Estherville IA. Alan and Jeff went on to play in the LA based hair band called "Mirror." David Ellefson (later of Megadeth) briefly was a member of Renegade in the winter of 82-83...but no recordings were made with him.

Mark...wow, great to hear from you! What a great single you made, shame it didn't recieved wider notice. I was made aware that the date was wrong since I posted. I also found out that the single came out in a pic sleeve. You don't have a spare copy (or two) under your bed by any chance? You can reach me via email (on my profile page...All the best
Robin