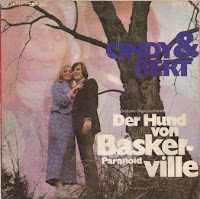 OK, you know the song...but certainly not like this! Sung by the Über Ice Maiden Cindy with her ghoulish Beau Bert, this version takes the song somewhere else entirely, plus it rocks like a mother...Don’t know who the backing band is but they have it all down pat, great Hammond and blistering guitar over a maelstromic drive to Hell. This was Cindy & Bert’s first outing before submerging into a putrid Schlager morass. Please do yourself a favour and also check out the performance on YouTube:
http://www.youtube.com/watch?v=pIYRFvQMh7A&feature=related It has to be seen to be believed...
Hear a full version of Der Hund Von Basker-Ville
Posted by Robin Wills at 11:00 pm

There's a great clip on youtube for this track - I posted it here a while back.

On a similar motif, you can also grab Hugo Strasser's storming versh of Black Night here

Yeah, Cindy & Bert... This one always is a sure fire hit at 2 O'clock when everyone is pissed and wants me to play "Nutbush City Limits", which I refuse of course. The backing band is The Jay Five from Wuerzburg, a group with a whole lot of LPs & 45s on Cornet in the 60s, but only half a handful are worth your while. Great to find a man like you in blogland. Babararacucudadas were the band that gave me faith in music again by the late 70s. If you like to have a look at what I'm doing go to spurensicherung.blogspot.com and click at prae-kraut pandaemonium. Yours, The Lolly Pope

if your into obscure german covers, take a look at Bennys try on Sham 69.

oh this is so good. I like the couple in the video 2/3 through who seem to find the band amusing in a condescending way. You're right, the band has it down perfectly.