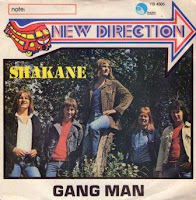 Shakane –Gang Man/Chicago to L.A. –Young Blood International YB 4505 (1974 Italian issue)
Gang Man is probably the rarest Shakane single out there, possibly only released in Italy. Both tracks aren’t featured on their Sonet or Young Blood LPs, but Gang Man does re-appear as the B side of their Rubettes-like 1976 UA/Rockfield single Jenny. Gang Man is a killer thudding piece of Boogie Glam with some ace power chords and cutting guitar. It has a slight Rockpile feel to it as well (remember they covered Trevor Burton’s Down Down Down in pure Edmunds mode). Gang Man certainly sounds louder here than on the UA release, but both versions appear identical save for a slightly longer fade, so you can probably put the sonic differences down to the mastering. Kingsley Ward (Rockfield owner with Charles Ward) takes production ownership on the 1976 release, but here is the production is credited to Mikki Dallon. Chicago To L.A. somehow reminds me of Belgo Glamsters The Garnets. Again full kudos are due to the guitar moves.

made my day with this one! I thought I had all the shakane stuff. I DON'T.....
thanks!!

I just hope someone get in touch with them

and put all of their tracks on CD!

The guys on the picturesleeve, they look like BZN!

Is was wondering about the pic. Shakane are usually a four piece, perhaps it's a "borrowed" photo?

You are right, the photo of this single is WRONG, another still unknown band! The Shakane added a fifth member only in the Eighties. By the way original member John Strange sadly died 2 years ago

The band in the picture is definitely NOT Shakane. We have no idea who they are or from whence they came. This picture is also on the Italian issue of the album 'Shakane' and has been the subject of a couple of communications from that country. As a matter of correctness the band became a five peice in 1973, when they took on a residency at the 'Towns Talk' nightclub in Bristol and decided that a keyboard player was required. The track 'Gang Man' was issued in the UK as the B side of the single 'Jenny' which was written for the band by Smith and D'abo

Hi
I can confirm that the band is indeed Dutch band BZN. I have just picked up a Portugese copy of BZN's Barber's Rock and it's the same photo...

Hi Robin,
Not sure if the news is out, but my old bandmate Phil Brown from The records is dealing with full-blown Parkinsons'. he's at a hospice in the milton keynes area. i wonder if maybe you could put the word around so people who liked his music could send words of encouragement. Let me know what you think.
best,
Huw Gower

Hi Hugh
Sorry to hear this news. Please contact me via my email on the profile page
All the best
Robin