Records that Sound like The Flamin’ Groovies part 4: Mark Ashton –Get Up and Groove 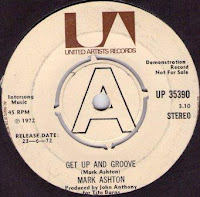 Mark Ashton –Get Up and Groove/ Barking Doges –United Artists UP 353390 (1972 UK)OK, a bit of a cheat here, as this track in fact features Cyril Jordan himself on slide guitar! Released a week before Slow Death, Get Up and Groove is a Stonesian tour-de-force with Cyril's cutting trademark Groovies slide supported by pumping brass with a singer snarling his way somewhere between Jagger, Roky Erickson with a bit of Joey Levine thrown in....well kind of...It also reminds me of Teenage Heaven period Daddy Cool. (Hi Honey Ho)
It appears that Cyril did some session work for a few UA acts at the time, but it’s possible that this was the only appearance that actually got a release; the others not getting any further than the acetate stage. It was recorded at Olympic studios and Cyril played on the B side as well, but the trademark Groovies sound is much less apparent there. Cyril used a blue fender mustang tuned to open G and a brass slide and set the pickup switches to sound like Ry Cooder.... It appears that they just wanted some slide guitar and "there weren't that many guys out there that played slide" so he got the job.
Not quite sure how this remained undocumented for so long, but here it is in all its 1972 crushed velvet and studded leather glory.
Thanks to Don and Cyril for the info.
Hear a full version of Get Up and Groove

Hey Robin, is this the same Mark Ashton who was in Rare Bird and Headstone? Still need to throw 'Turn Your Head' up one of these days. That song will not be denied!

Not sure if there is a connection; Turn Your Head is indeed a fine fine number that deserves wider appraisal

That's a fantastic discovery, how did you come across the Groovies connection? You sent me scurrying to pull down from my shelves Jon Storey's Bucketful of Groovies, which I always thought had a pretty much definitive discography. The only session he lists is for the band's appearance on Roger Ruskin-Spear's lp "Electric Shocks." "Get Up and Groove" sounds great and I'm happy to say I blagged a copy today on eBay, but I'd still like to know the story of how you stumbled across this bit of hidden Groovies' history. Best, Peter

Simple really. Don C from the Groovies list mentioned a single that Cyril was involved with on UA in 72. He mentioned the name Ashton. The rest was just joining the dots and getting the background story of the session from Cyril (via Don)

it is the same Mark Ashton. The common denominator is John Anthony, who signed and produced Rare Bird to Charisma, Headstone to Neptune Productions and produced this. He told me it was recorded at Morgan Studios in Willesden with Roy Baker in the engineer's seat.

Thanks Howard...great insight as always...

UPDATE this item doesn't seem to be working. Any chance of a redux?

It's working fine from here...

Any chance or reposting this? I don't see a link.