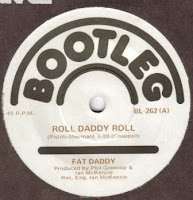 Fat Daddy –Roll Daddy Roll/Help Me –Bootleg BL 262 (1976 Aus)
Fat Daddy were a Melbourne Band and big favourite on the Sharpie scene. They were known to wear face masks for live performances:
“We used to wear these grotesque masks. We were anti the whole pretty boy/satin/Sherbert thing. We wanted to be the ugliest band in the world..."(Max Wella –Top Fellas).
This is the first of two singles released on Bootleg (the other being Fat Funky Rock And Roll –which I need!!). Roll Daddy Roll is a no-nonsense-straight-ahead Boogie/Glam piece in a similar world to Buster Brown or The Angels.
The band consisted of Max Vella, Mick Stillo, Tony Catz and Carl Stanley. They later merged with Ken Murdoch (Ex Taste; also on the Bootleg label) and became Texas. Texas were pretty big on the live scene from 1976-79 and released 4 singles and an album in a rockin’ bluesy ZZ Top style.
Hear a full version of Roll Daddy Roll

Fatty Daddy was the best Australian band ever. Love u Uncle Carl. Wish I still had ur drum sticks.

Hi purepop.
Unfortunately I have not seen Uncle Carl for awhile, but no doubt he would have one. I remember seeing them play at the Frankston PNC hall when I was about 8 years old and the band going back to my Mums and i received his drumsticks. Would love to see reformed, but unfortunately i doubt they would ever re-group. If anyone has a copy let us know please.....Did find a copy on Ebay, perhaps you could try there. I know my older brother has all their 45's and album. Thank you. I remember they played at the hell's Angels concert in Broadford in the 70's also, I think with Rose Tattoo.