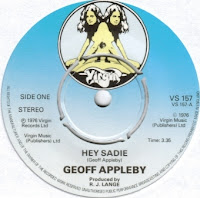 Geoff Appleby -Hey Sadie/ Move On Down The Road -Virgin VS 157 (1976 UK)
Geoff Appleby had a long career starting off with The Rats (the Hull Rats, Geoff joined at the same time as Mick Ronson). He was also a member of the Hunter-Ronson Band and released two singles on Virgin under his own name before reappearing as Buzz with the singles The Rock Roller Coaster and Mony Mony which were only released in Germany.
Hey Sadie is Geoff's second Virgin single and it's a cracker. It's a late rockin' Glam track with a killer sense of melody. The arrangement is ambitious and as with the Buzz singles, Hey Sadie is produced by Robert "Mutt" Lange. The sound is full, bright and very loud making the whole package sound like a great lost Mott The Hoople single.

Click on title for a soundclip of Hey Sadie
Posted by Robin Wills at 11:39 pm

Again, Motors or Bram Tchaikovsky with an ounce of class or a half-pint of personality. Or maybe a very restrained HMK/Gary Holton studio project. Bravo, I say. Shouldhavebeenhit.

angelo said...
This comment has been removed by the author.
4:17 pm

Hi
I don't have that Buster LP, but it does pop up online quite often
Good luck
Robin

Mmmm, I went for Hey Sadie as well. I wish it had have been a hit, 'cause the charts were in a dreadful state here in Australia round '76.

Glad you liked my man's work. PS Colin Makamson said to ask you what you sold the Buzz singles for!!!!!!!