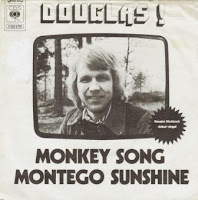 Oh my god… Oh my god…Those were not only the last words uttered by Princess Diana at the back of a Mercedes, but the only words I could muster on first hearing this full-blown-no-doubts-about-it MASTERPIECE. It’s just so incredible and undeniably perfect, that I just can’t get this stupid grin off my face.
If you’re not immediately hooked by those weird slowed-down intro vocal effects, the loud and I mean LOUD guitars, the thumping beat, the mother of all catchy tunes, the inane lyrics, you’re reading the wrong Blog. This is like Pantherman in a monkey suit running Jungle Jim out of town.
Douglas Westlunds was in fact the drummer on some weekly Swedish TV show , but one night he stepped up to the mic and performed this number. Sweden went nuts, the phone system melted and he was offered a contract to release the song on the spot. It became a semi-hit, and as far as I know Douglas wasn’t heard from again. I would love to hear different though…Credit where credit is due. The superb loud production is by Mats Olsson and Monkey Song is written by Jorgen Larsen. BTW, as expected, the B side is not worth throwing or waving your banana at.

Thanks to Eddie for turning me on to this incredible single.

Click on title for a soundclip of Monkey Song
Posted by Robin Wills at 9:09 pm

Great tune. More than a sound clip my friend! This stuff needs to be preserved!

just recently discovered your blog. Digging some great glammy gems like this nugget. Wish I could find this for sale somewhere! Cheers- Ryan (vegancharm at yahoo.com)

This is my father and they actually made a follow up, Highway Trucker with the brilliant B-side Rock n Roll Virgin which is actually the best song among these. Douglas still works as an musician and is actually playing drums on more than 3 000 recordings made between the 60´s and the present.

Heya Daniel
Thanks for the info. brilliant to have ouglas single to another Douglas single to seek out. I dearly love Monkey Song, be sure to give your dad my best
Robin