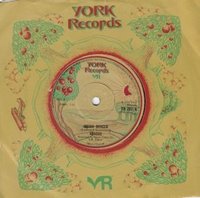 Opening with sustained lead guitar, Indian Dancer powers along with crunchy guitar, fuzzed out booming bass and pounding drums with ancillary handclaps and tambourine. The track deserves to be played LOUD for full effect, just let those damn toms toms thud their way into your brain. The song is dead simple and the chorus is nothing short of incessant! Is there anything else on York Records that worth looking out for? I have a single by Winston –I Won’t Let Anna Go/ Brother Jim (YR 212) that starts out pretty good until it gets ruined by a naff chorus.
There was another band called Abacus from around the same time and I’m pretty sure that they’re not one and the same. The other Abacus seemed to have been German and released an album and at least a couple of singles.

Shares its guitar-lickery with "River Of Love" by Child, and it's vaguely-pseudo 'Indian' vibe from Redbone. Hey! Why hadn't I thought of that?

We recorded this at Morgan Studios in Willesdon, London and was relased on the York label in the UK and on Bellaphon in Germany
Mike

Hi Mike Ray Sherry (singer) has also been in touch. There is also a Dutch pic sleeve on Pink Elephant that I have, if you want a scan of it, please let me know via my email (on the profile page) and I'll send you a scan of it.
Being in Wembley I am halfway between the both of you (BorehamWood and Ruislip)!
All the best
Robin

Hi I am Alan Dennis I was the drummer of Abacus and would really like a scan of the Dutch sleeve. Hi Mike and Ray(sorry ID a bit boring but hey I am old now). The other members of the band were Bernie on Bass, and Gary on lead guitar.

Hi Alan
Send an email to: purepop1uk@yahoo.co.uk and I'll email you a scan
All the best
Robin

Hi Alan (drummer)
I found this by accident. Hope you are well and ok. I saw Ray a little while ago he was in Spain.
Just to remind you it wasn't Bernie on bass on the record it was me.
Peter Reeves...take care

I can confirm it was Peter Reeves who played bass on the original recording of Indian Dancer... I wrote the song...Will Ludford..

This is Mike (Guitar) Abacus.
Just to let you know (if this gets to you) that Indian Dancer is being played on BBC Radio Norfolk, Suffolk, Essex and 3CR on the Keith Skues program, between 10 & 11pm on Sunday 07/05/2017.

Thanks Mike... great to know the Song is still getting some air play... and Abacus lives on!! Will Ludford.